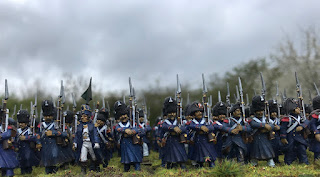 So, it's been a long time - had a lot on my plate and never seems to be enough time to do the research, AND paint these armies, AND do this blog. I actually took these . pics over a year ago but it's taken until now to get round to putting them up on the blog. Part of the delay comes from being in the process of trying to write an article about this unit - perhaps to publish online somewhere - and not wanting to post the pics of the figs without the research (who they all were, the history behind this unit and its make up in June 1815). But I've decided it might be years yet till I finish that so I'll just put the pics here and the accompanying data and stories will hopefully follow later on at some point. 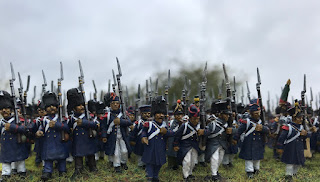 The 3rd Chasseurs, part of what was referred to as the Middle Guard - was only formed in May 1815 so, as a unit, they had been together for less than 2 months when they marched up that slope in a brave attempt to finally crack the Allied line. 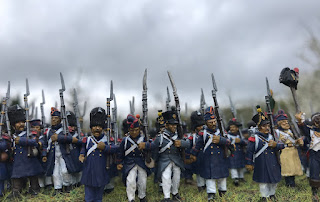 The battalion was formed of 4 companies - each of around 200-250 men. Of these almost exactly half were ex-Imperial Guardsmen - largely ex-Young Guard, who had been formed into the Chasseurs a Pied de France on Napoleon's exile to Elba.
The other half were drafted from pretty much every infantry regiment in the French army - 18 men from the 59 Ligne, 9 from the 4 Legere, 34 men from the 39 Ligne, 3 men from the 101 Ligne, and so on.
Many of these men were Serjeants or Corporals in their original regiments but on transfer lost their rank and just became "Chasseurs". 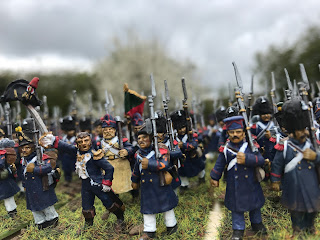 They were largely veterans of many campaigns - many of them were survivors of Russia and a large number had spent years in Spain and Portugal. 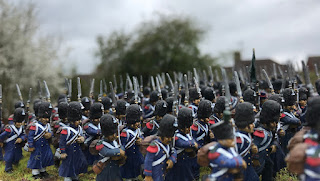 One striking feature was the high percentage who had spent years as prisoners of war - some for over 10 years - and had only been released in the peace of 1814. Some poor souls released in Russia, had only made it back to France in 1815, just in time to be pressed back into service! It makes one wonder what kind of physical and mental state this troops must have been in. 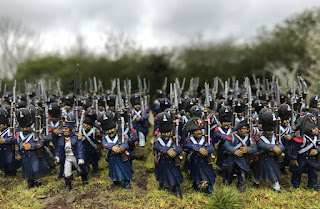 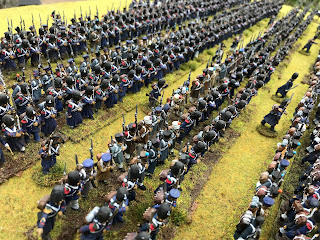 I've tried to reflect what I imagine must have been quite a ersatz hotchpotch situation regarding uniform and equipment - and have mixed Chasseur uniforms with line uniforms. 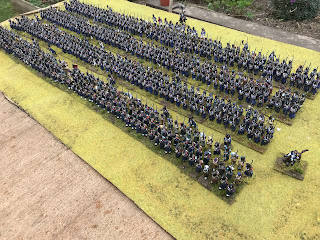 A huge thank you to Steve from Victrix who was extremely kind and sent me some spare sprues of their excellent Chasseurs a Pied. Victrix make up the bulk of three of the four companies. 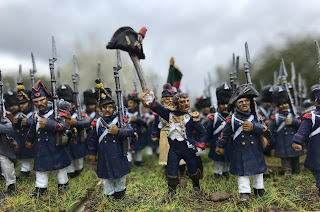 The fourth of the 4 companies is comprised of Perry metals and converted plastics. I had great fun with these - you might also spot some old Foundry figures mixed in at the back. I've probably committed all manner of sins regarding wrong buttons and plumes etc but will hide behind the "ragtag army" defence and pretend such "errors" were in fact all carefully considered and deliberate. 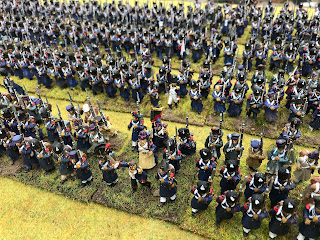 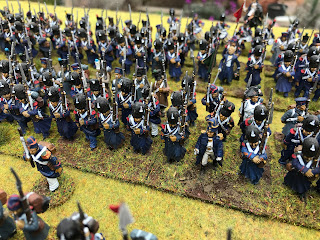 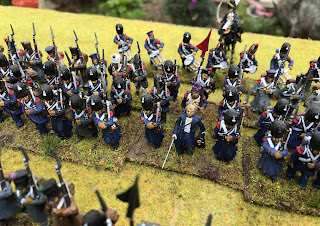 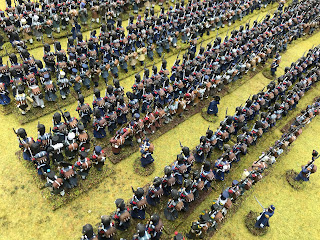 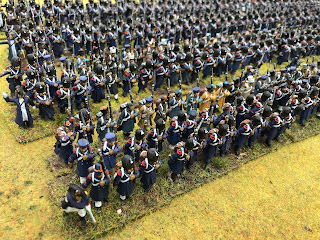 Until then, Merry Christmas all and let's hope things start getting better in 2022!