I was hoping to do another end of year review like last year http://britisharmywaterloo.blogspot.co.uk/2012/12/end-of-year-review.html but I'm still kind of living out of a suitcase, and many of the figs are boxed up in various family members' garages. Hopefully I'll have everything back together by the summer and I can do a mid-year review!
Had a very nice Christmas and was lucky enough to receive some great gifts - from my sister a really interesting book about Napoleonic surgeon Guthrie, and from Her Indoors some Perry hussars and metal light dragoons. The former I'm going to do as the 7th Hussars, Uxbridge's favourites and in the thick of the action during the retreat of 17th June as well as at Waterloo. The light dragoons are really nice figs, a standing pose rather than galloping, which I personally prefer, but I will need to win the lottery to complete a regiment of these at 1:1!. She also got me a Prussian wagon (!) - I might try to paint it and sell it, or swap it for some more British cavalry. 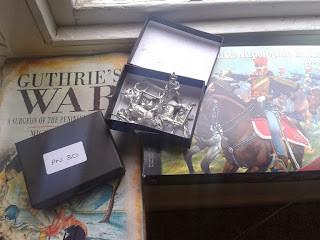 I have been really enjoying following all of the fantastic entries at Curt's painting competition - I'm amazed how people can complete large units so quickly. I realised I wasn't going to be a very useful contributer if I just rocked up with a vast finished brigade in March, so I rushed off Major Maclean of the 73rd http://analogue-hobbies.blogspot.ca/2013/12/from-lordh-28mm-british-officer-10.html just to get my name on the board! 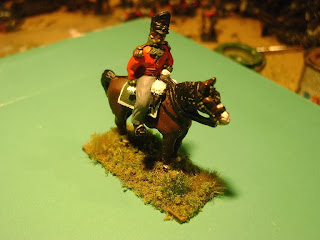 I really don't like the pic - taken without natural light (that's the UK at midday at the moment!), which makes everything look horribly glossy, plus you can see the rush job - there are specks of flock on the horse's mane! Eventually poor Maclean will be rebased on a command base with colours, colour serjeants etc of the 73rd.

Meanwhile I continue with Halkett's Brigade - I spent the whole of today, for example, just doing 600 haversacks! 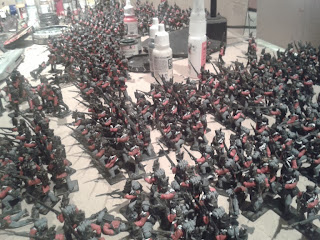 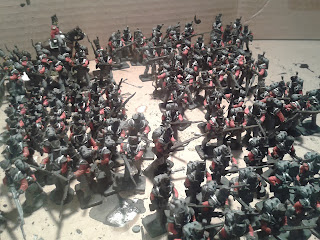 I've realised that even if I finish all these for March I might not be able to base them all as I will be missing some kneeling figures (I'm making squares of three ranks, front rank kneeling). If anyone has any spare Victrix kneeling figs (or Foundry etc) please get in touch and I will buy them from you!