Have spent the last few weeks doing some Highland reinforcements for the 42nd, 79th and 92nd - I'd forgotten how long these take, on top of the usual fiddly British lace there's the tartan kilt, the diced band around the socks and the checkered band around the bonnet. I'm still only half-way through.

The majority of my time, however, has been spent undercoating figs in preparation for Curt's amazing painting challenge http://analogue-hobbies.blogspot.ca/2013/11/lets-go-fourth-annual-analogue-hobbies.html I undercoat each fig by hand so it has taken quite a while!
It's my first time doing anything like this and I'm really looking forward to it (today, 15th Dec is the start day). I've given myself a target total of 1200 but have no idea if that is realistic or not - whatever, I'm hoping it will drive me on to get more done, and that's the main purpose of the "competition" I think!

My main project will be to do the whole of Halkett's Brigade at Waterloo. This was made of the 30th, 33rd, 69th and 73rd. Unfortunately (for them) they were almost annihilated at Quatre Bras and thus at Waterloo (fortunately for me) were so reduced in number that they could only be amalgamated into 2 squares instead of 4.
In the past I've mixed Victrix and Perry but recently I've started making "pure" units - the 4th are entirely Perry, example. For Halkett's men 99% of the figs are Victrix (Steve or Julian, if you're reading this, yes I WOULD love some decals for this lot! :)). 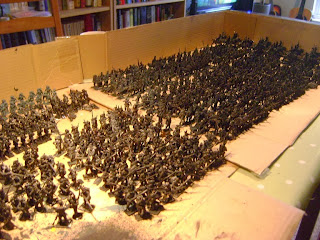 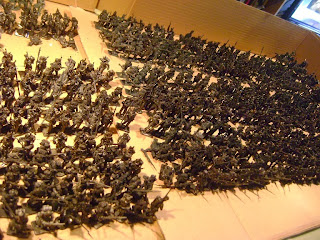 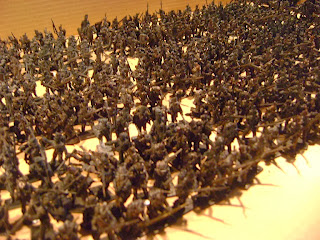 Obviously, after these 800 or so redcoats I'm going to need a nice change so I've lined up a number of "carrots" to work towards. These are: 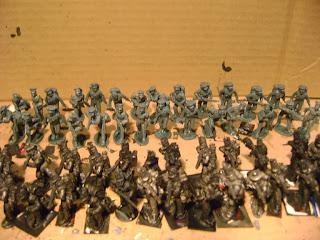 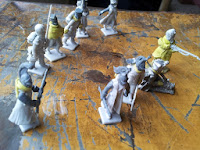 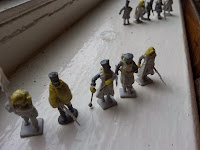 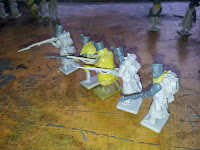 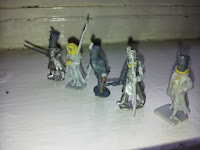 I think I'll have fun painting these but mustn't get too attached as I shall be trying to sell them to fund more 1815 British cavalry! 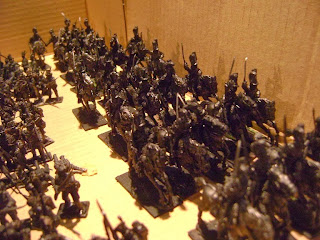 and a scratchbuilt wagon full of wounded from Halkett's Brigade 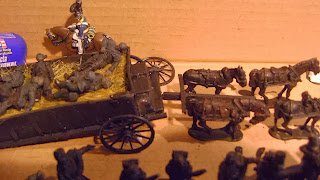 A massive thank you to Curt for organising the competition - I am frankly amazed at the amount of work he must be putting in, I find it hard enough to manage to update this blog more than a couple of times a month.  Speaking of which, I've been doing this all morning when I should be starting on the painting (!)...but wait a minute...Herself is saying we have to go out shopping...and then visit some family...and then do some DIY...and then some more shopping.... maybe tomorrow then!