Here are 90 men of the Royal Welch, part of a square of the whole regiment I have been working on. 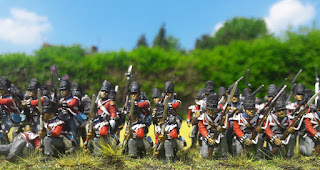 The Royal Welsh Fusiliers was a battle-hardened regiment whose battle honours included Coruna, Martinique, Albuera, Badajoz, Salamanca, Vitoria, Pyrenees, Nivelle, Orthes and Toulouse. Amongst those men who lived to receive their MGS medals in 1848 claims for 10 or more clasps were not uncommon. 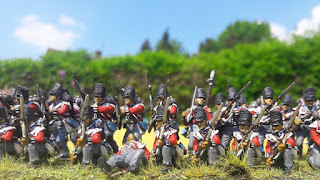 Despite their heritage, this “Welsh” regiment contained twice as many Englishmen as Welshmen. The known places of origin amount to as follows: 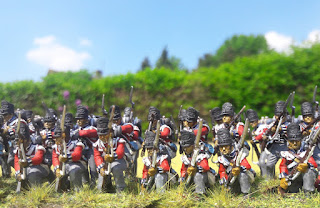 When Byng’s Guards moved forward to reinforce Hougoumont their place in the line was taken by the 23rd who formed square.  The regiment remained in this position all day sustaining repeated cavalry attack and one infantry advance. 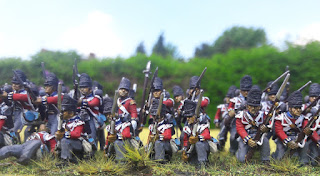 Obscured from view here (his pike is just visable from the rear rank) is Serjeant Ingham, from Kenyon, Lancs who had enlisted in 1807 aged 23.  He served in the Peninsula and during the storming of Badajoz carried the wounded Major General Colville from the breach. So began a cycle of promotion and reduction (he was demoted to Private at least three times) which lasted over his 20 years service. 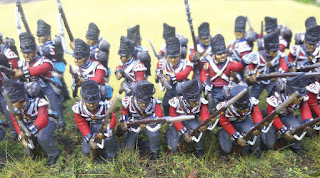 Here was can see Lieutenant Harry Palmer.giving orders in the midst of the ranks. He was born circa 1793, the son of a reverend in County Longford and commissioned in 1808. Upon quitting the army in 1819 he followed his father, and grandfather, into the church.  He was posted as a chaplain to the colony in Freetown, in Sierra Leone where he soon died aged 30 leaving a young widow. 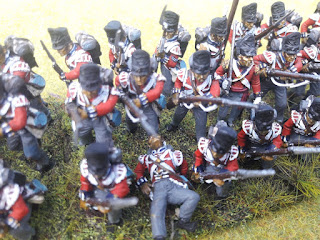 In the foreground the wounded man is Private James Brockley, from Manchester, who served 26 years in the Regiment.  By Waterloo he was a veteran of six Peninsula battles and had been wounded in the shoulder at Badajoz. At Waterloo he was wounded again, this time in the leg, but continued to served until 1836.  His conduct on discharge was listed as “excellent”.  He never married and, in 1861, became an In-Pensioner at Chelsea. 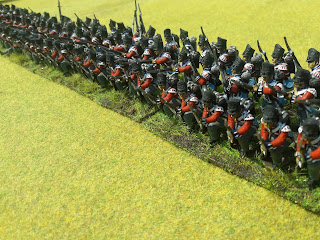