Here are 90 men of the 1st (Royal) Dragoons, mostly of Methuen's No.7 or "D" Troop. I have hurried to get these finished in time for 18th June so there are tons of little errors and imperfections, mostly chips on the painted metal - I find metals 100% more troublesome than plastics - which I will need to go back and tidy up. 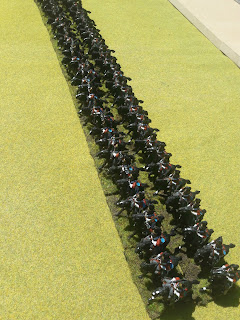 The 1st (Royal Dragoons) were the "English" part of the Union Brigade - the 2nd Dragoons being, of course, the Scots Greys, and the 6th (Inniskilling) Dragoons being predominantly Irish. 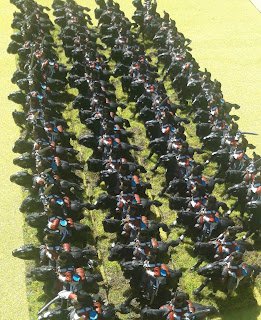 The Regiment had a nominal strength of 444 but this would have meant a maximum of around 380 sabres on the field. These men formed 6 Troops which were then paired together to form 3 Squadrons. 96 men were killed or died of wounds. A further 69 men are known to have been wounded but records are incomplete and this number can probably be doubled. 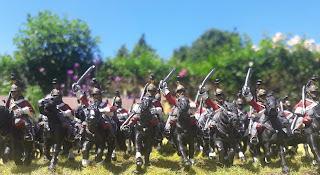 The 1st Dragoons, or Royals, was the only regiment of the Union Brigade to have had recent experience of warfare. The Regiment had served in the Peninsula at Fuentes D'Onor, Vitoria and Toulouse and the majority of men at Waterloo had served in at least one of those battles.

The Regiment was on the right flank of the Brigade’s charge and became intermingled with the left flank of the Household Brigade (the 2nd Life Guards). The column at which they charged was under the command of Bourgois and consisted of the 105th Line (whose Eagle they captured) and the 28th Line. 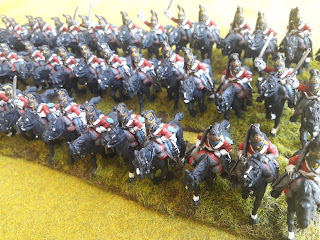 The Regiment was overwhelmingly English – the ratio being 92% of English origin with the remainder mainly from Scotland and Wales. The men came from a broad range of counties but the most common were Lancashire -15%, Wiltshire -13% and Staffordshire (mostly Birmingham) -  11%.  Curiously, the five men from Shropshire – Corporal Williams and Privates Bevin, Clarke, James and Turton – were all killed .


There were few youths in the Regiment – the average age was 31 with 92% of the men being aged 25 or over. A large number of men had enlisted in 1804 and a similarly large number would be discharged in the year 1821 when the Regiment was reduced. 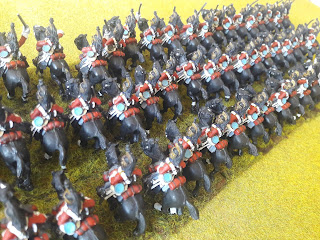 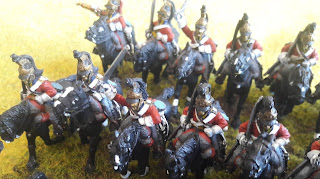 (back row, left to right) - Trumpeter John Webb - from Essex, enlisted in 1804. Survived Waterloo only to be Court Martialed two weeks later for unsoldierlike conduct in having in his possession a watch supposed stolen from Private John Rains.  He was sentenced to 200 lashes and received 197. Lieutenant Samuel Windowe (wounded) - promoted to Captain in 1822, Corporal William Tate (killed) - from Halifax, Private Joseph Townrow (killed) - from Suffolk, Private John Rains - from Yatton, Somerset. 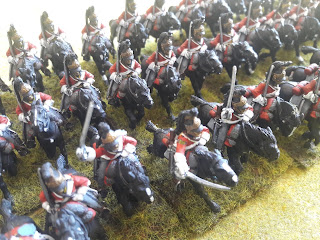 Serjeant William Grant (in the front rank above) was from Westbury, Wiltshire and had enlisted in 1804. He saw action in the Peninsula and survived Waterloo, being discharged in 1821 aged 35. He lived to collect his MGS medal in 1848, with clasps for Fuentes D'Onor, Vitoria, and Toulouse.

These 90 figs are all old Perry Foundry, picked up bit by bit from Ebay over the last 20 years. I think my long campaign to persuade Alan and Michael Perry to do a box of plastic British heavy cavalry has been unsuccessful so I guess that, at the above rate, it will be another 20 years before I get to do the next 90 men of the Union Brigade!
Posted by Lord Hill at 07:33