Happy new year! Hopefully I'll get more done in 2017, the vegetable garden took over most of my free time in 2016, but I've been missing the world of 28mm Waterloo of late.

A few months ago I picked up a box of Perry Austrian plastics cheaply on ebay, and then didn't really know what to do with them. The uniform seemed to lend itself nicely to doing some Dutch forces but the main problem was with the very un-Dutch gaiters which the Austrians wore.So I set about them with some green stuff and was pleased with the results.
Now, I did take some pics of the green-stuff stage so that I could show the unit developing but, due to my amazing technical skills, I seem to have somehow deleted them! Nevermind, here are some pics - although still a work in progress. 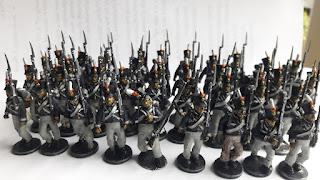 Only the Dutch casualty at the front (a Perry metal) is a "proper" Dutch figure. The plumes were grafted on from spare British shakos. As many arms as possible are French, as they have quite similar cuffs. I suppose the shako plate is the biggest "error" but I can live with that. 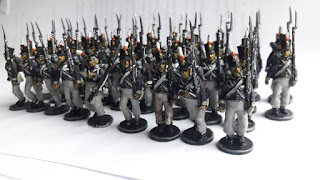 I would like to do more of these but have run out of heads. If you have any spare Perry Austrian heads in shako please get in touch! - I can buy them from you, or can perhaps swap them for any of the huge range of spare bits and bobs currently filling my garden shed.