It's been too long since I posted here, but I have been quietly continuing the project. Here is the most recent unit I've been working on - the light infantry regiment, the 52nd (Oxfordshire) Foot.

With the exception of one of the Guards battalions, the 52nd Foot was the largest British Regiment at Waterloo, its numbers recently bolstered by the recent arrival from England of the best men of the 2nd Battalion. They were not at Quatre Bras and were thus at full strength on the 18th. Consequently, I've been kind of dreading the task of painting these thousand! Here then, are the first 100. 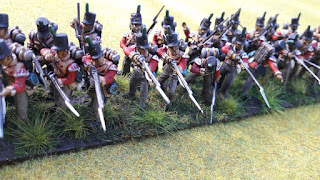 The 52nd were considered one of the finest regiments in Wellington’s army. They had fought with distinction throughout the Peninsula, often in the thick of the fighting as part of the crack Light Brigade.
At Waterloo, with such a large number of men present (double the size of some other Waterloo regiments) it was decided that it would be more manageable if the Regiment formed in two squares instead of one.  The right square was commanded by Colonel Colborne – the left by Captain Chalmers (Colburne writes “[Major Charles] Rowan was anxious to take the command of the Square in which Lieutenant Chalmers was, but on my acquainting him that I should superintend both the Squares he remained, at my request, with me.”)
The majority of casualties came during the firefight with the Imperial Guard and the ensuing manouvre, Colborne estimating “the right wing of the 52nd lost nearly one hundred and fifty men during the advance.”
The pursuit of the Imperial Guard was interupted when a number of cavalry suddenly rode in front of the  52nd, who presuming them French, fired into them. They were in fact British, the 23rd Light Dragoons, not for the first time the blue of their uniforms and the French-style shako causing them to be misidentified. Wellington rode up during the shouted confusion which followed, as officers tried to make themselves heard and call a halt to the firing. The Duke, when told of what had happened, had no interest in apportioning blame but was keen no further delay should take place in pursuing the French, saying to Colborne“Never mind, go on, go on.”


Number 1 Company (shown here) had a nominal strength of 111 men and suffered 19 casualties.The origin of the men of the 52nd was among the most diverse of the British regiments at Waterloo. It consisted of approximately:


56% English
35% Irish
6% Scottish
4% Welsh
The diversity continued within these national groupings with hardly a part of the British Isles not represented. The English, for example, came from 35 different counties (the most common being, in order: Kent, Warks, Lancs, Yorks, Berks, Hants) while 28 Irish counties were represented (Galway, Tyrone, Roscommon, Donegal, and Antrim being in that order the most common place of birth.) 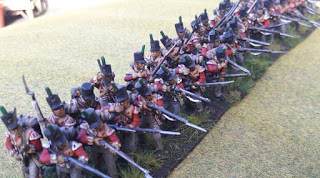 Private Patrick Lowe was born in Kilandra, Wicklow.  He enlisted in 1804 and served in the Peninsula where he was part of the Forlorn Hope at the storming of Badajoz. He not only survived the slaughter of the assault but also captured the governor of the town for which he was rewarded.  He was discharged in 1819 and died in Inniskillen in 1852 aged 84.

Privates Dempsey, Lane and Scatterhorn of Number 1 Company were Court Martialled for theft at Liiliers on 1st June 1816 and found guilty. Dempsey and Lane received 600 lashes and Scatterhorn 300.

I'm already working on No.2 Company but might have a rest when they're finished and do a different unit. Anything but more buff and scarlet!