Some of my favourite figs of all time are the Perry 28mm French naps "standing around" - they make a wonderful range of line and guard infantry standing waiting, which is what I imagine a lot of Napoleonic battles mostly consisted of. Alas, the Perrys are yet to make any similar figs for the British infantry.
I've never liked the action, charging figs as much as those guys with the rifle slung, or sitting around smoking a pipe. It's a pity that noboday makes plastic horses which are standing, as I would much prefer these to the endless charging poses. I found the two poses of the Perry plastic riflemen (both running forward) particularly limiting for my purposes so I decided to take a Stanley knife to the hundreds I had gathered and start making my own standing figs - grafting rifle torsos onto line infantry legs.

The remainder frankenstein creations (line infantry torsos with running legs) will all be put to use one day, probably as Light Company guardsmen charging through the orchard of Hougoumont.

I still haven't bought any glasses despite my failing eyes and I'm finding these guys surprisingly tricky with all the silver buttons. There's still a lot to be done but I thought I'd post some work-in-progess pics, so you know I'm still working hard! 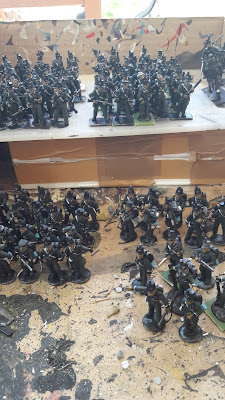 I have plenty of action-pose riflemen for the two companies of the 1st Battalion  who were down in the sandpit by La Haye Sainte, but the 100 or so guys pictured here are from the remaining companies up on the ridge who stood, like line infantry, behind the hedge for most of the day. 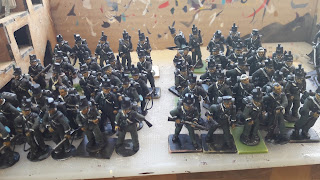 I will post more details of who exactly is who when they're finished. I just have a few more details and the basing to do. 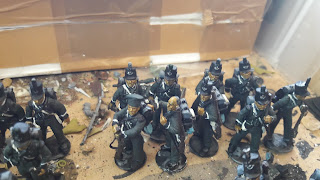 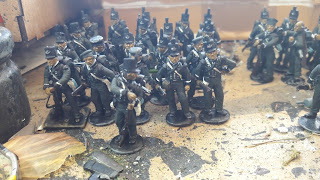