Back in the saddle

As Robert Plant once said, it's been a long time since I rock n' rolled.  My last post on this blog was nine months ago so I should perhaps explain myself.
Firstly, my eyes suddenly went. My whole life I'd prided myself on having hawk-like vision. That number plate at 20 metres? I'll give you the serial number on the manufacturer's plate below it.
Now, however, a fog has descended. One day I realised I was starting to hold things away from me, and that I can no longer see things very close up. Not a disaster, I just need to get some glasses I suppose. I wonder if painting all these little 28mm bastard was to blame? My brother in law is an optometrist and he reckons it's just "too many birthdays".

So, failing peepers was the first spanner in the works and added to this was a sudden passion for gardening! We got an allotment, and I quickly began to show all the same obsessional triats with veg as I have done with my Waterloo army - why have five or six tomato plants when you can grow thirty? Why build one raised bed of parsnips when we can have seven? Where once Her Indoors complained constantly about the dining table being covered in Royal Horse Artillery limbers and a complete company of Welch Fusiliers, now she complains about the sprawling cucumber plants taking over every window sill.

A third reason for my hiatus has been plain fatigue at churning out yet more redcoats. For the preceding 8 years I'd had the 200th anniversary driving me on. Of course I would never get close to doing all of Wellington's army in 1:1 but I was going to try as many as I could.


But once June 2015 had been and gone, I felt like a bit of a rest. A few months ago I picked up the paintbrush again but I started doing some French instead. What joy! All those lovely easy greatcoats! No lace! Before this year is out I plan to have Marcognet's division at 1:1 to give my Brits something to fire at. It was a nice way to get back into the saddle and I soon felt ready to return to my British army project.
A few weeks ago, we had a sunny day and I gave the shed a much needed clearout. While the boxes were all out on the lawn I couldn't resist having a look at some of them and placed a few units on the grass. 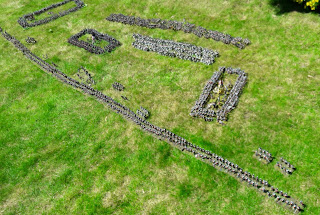 The photos above show Pack's brigade: three squares from left to right - 1st Foot (Royal Scots), 42nd Foot (Black Watch), 44th Foot (East Essex) - with the 92nd (Gordons) charging at the rear. In front of the 92nd are a troop of the Scots Greys. 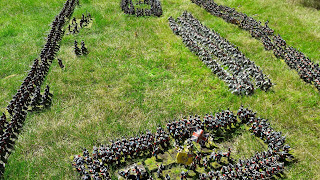 In line at the front are the other highland regiment  - the 79th (Camerons) of Kempt's brigade in line. Yes, I know all the units are not in the correct position as at Waterloo, but my garden isn't big enough, sorry! 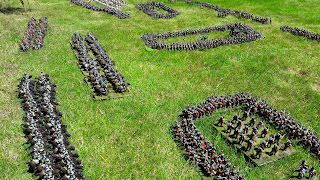 Pack's brigade in the distance with Halkett's combined square of the 69th and 33rd Foot in the foreground. 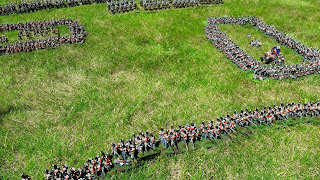 The 28th (North Gloucestershire) Foot in line in the foreground. 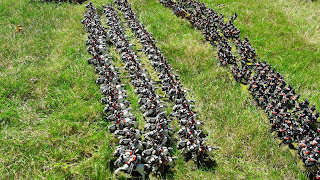 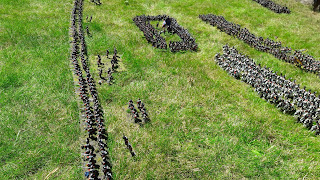 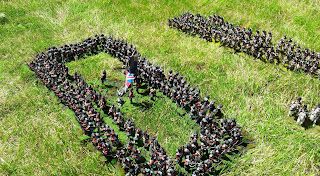 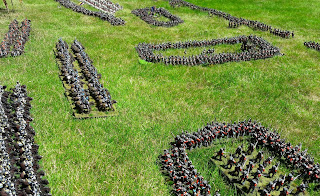 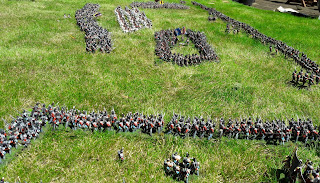 I wonder how big a garden I will need one day to line them all up properly? The distance from Hougoumont to La Haye Sainte is about a kilometre. If a 28mm figure represents a 1.8m man (tall for the age), how many metres will I need?  My grey stuff is now as weak as my eyes, so there's your weekly maths question - if anyone can give me an answer I'll be very grateful!

I'm now back hard at work on the project and currently doing the 1st battalion 95th Foot (the Rifles near La Haye Sainte). I will post some pics SOON!
Posted by Lord Hill at 12:38