Another regiment finished. Years ago I started out trying to do a company in 1:1, this then grew into doing a whole battalion. Now, I'm trying to finish Pack's Brigade - 3 Scottish regiments and the 44th.
Despite being one of the smallest units in the Allied line in 1815 (487 men, reduced to about half that number at Quatre Bras) this has taken me ages to finish - real life gets in the way too often. 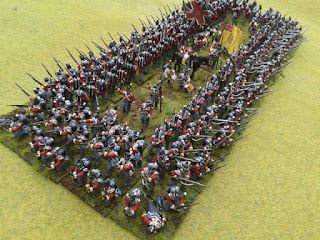 The 2nd Battalion of the 44th had arrived in the Peninsula in 1810 and was present at Fuentes D'Onor, Badajoz and Salamanca. However, following the retreat from Burgos the Battalion was so depleted that it was returned to England.  In 1814 disaster befell the battalion at Bergen-op Zoom where, a very confused attack led to heavy casualties and 11 Serjeants, 3 drummers and 205 rank and file being captured. They were quickly released in the peace that followed soon after, and 117 of these survivors  were present at Waterloo.

The Regiment was predominately Irish – from the data available the ratio was roughly 60/40% Irish/English – the Irishmen coming almost entirely from the south, in particular from Tipperary, Cork, and Dublin. 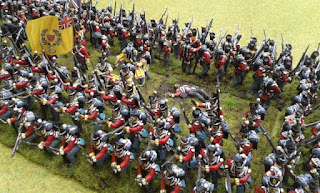 The Battalion was disbanded on 24th January 1816. Those men not eligible for discharge were transferred to the 1st Battalion 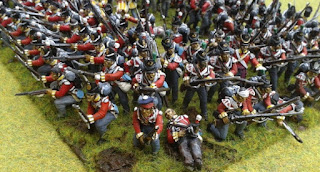 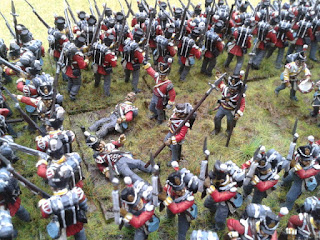 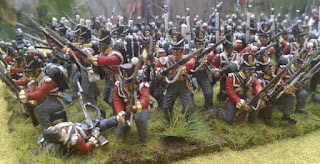 Private Thomas Brooks (at the corner of the square above) was wounded in five places and lost an arm.  From Crealy, Worcestershire, he had enlisted in 1812 and was only 21 years old in 1815.  He was discharged in April the following year. In total 10 men of the 44th suffered amputation after Waterloo. 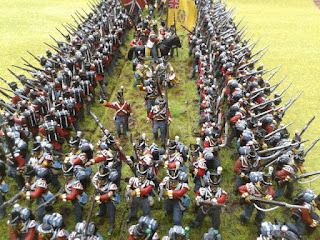 With Hamerton wounded, Major O’Malley (seen above mounted) commanded the battalion at Waterloo. From Castlebar, Mayo, he joined the army after serving as a Volunteer in the militia during the rebellion in Ireland.  He later commanded the 88th Foot (Connaught Rangers) and died a Major-General in 1843. 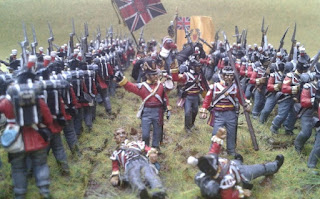 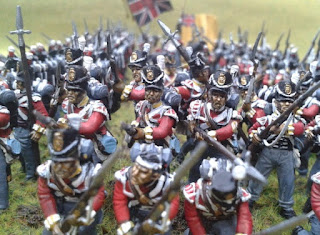 Men of the Grenadier Company. The average length of service already served by Privates in this company was seven years. Privates Hearle and Connolly were the oldest hands in the ranks, both having enlisted in 1799. Seen above in the right-centre of the pic is Serjeant Forbes Lyster who carried old wounds of old campaigns.  Aged 28 at Waterloo, he had been wounded in both legs and his shoulder three years earlier at the storming of Badajoz. 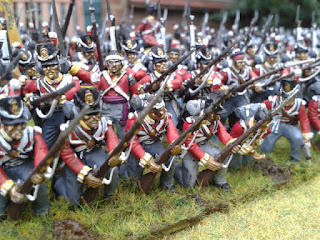 Men of Number 7 Company who suffered the heaviest casualties of any company in the 44th, losing 18 men from a starting strength of 41 men (41%).

So what's next? Maybe some more Light Dragoons? Maybe some Rifles? Or maybe press on and finish Pack's brigade properly but that might mean...more tartan!!!...NOOOO!!!