I'm not talking about Mr & Mrs Tintin, but rather using up some spare bits and bobs to make Belgian line infantry, and some Belgian heavy cavalry.
The line infantry is simple enough - British bodies and shakos with French arms and packs. 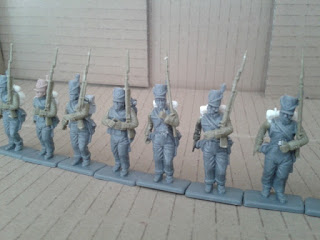 I took a soldering iron to the lace above their waists, although, to be honest, the result is probably no better than just removing it with a sharp knife. 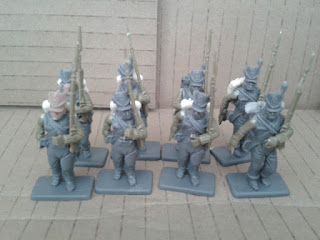 If anyone reading this has any spare French marching arms, please get in touch and I can buy from you, or swap for any plastic parts you're looking for.

Next up are the 2nd Carabineers. As I understand it, the 2nd Carabineers were Belgian and wore helmets while the 1st and 3rd Regiments were dutch and wore bicornes. To make these I used French dragoons with French Carabineer heads. They wore blankets (or greatcoats?) rolled over their shoulders so I made these using green stuff which turned out to be quite easy. 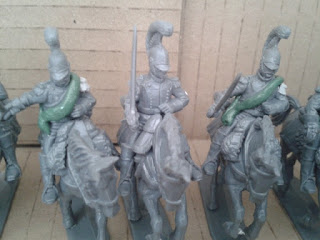 Belgian helmets were slightly different to these French ones in that they had a lion's head moulded to the front, but I will have to do my best to replicate this with the paintbrush. 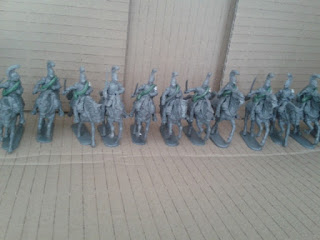 Maybe one day I can make some Dutch Carabineers using some of the hundreds of spare bicorne heads I have! 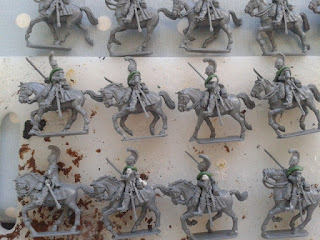 Each box of Perry French dragoons has only 3 elite figures with epaulettes so I bolstered these by adding epaulettes to figures, simply cutting a square into the shoulder and then adding an epaulette from a spare French flank infantry arm. I don't think this surgery will be noticable once they are all painted.

I really enjoyed making these conversions, they were a welcome distraction from the mass of 92nd Highlanders which I'm working to complete. More on that to follow.