Here at last are the 72 men of Number 1 Troop of the 12th Light Dragoons. 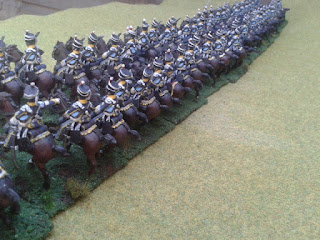 Although Wellington had, in general,  a low opinion of British cavalry he made an exception of the 12th Light Dragoons who he felt, under the able command of Fred Ponsonby, could be trusted to stop when required and not go galloping off in all directions. Ironically, it would be the 12th who, of all the British light cavalry,  showed most impetuosity at Waterloo and displayed exactly those bad tendencies upon which Wellington frowned. 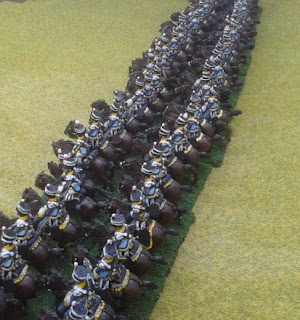 The 12th were an experienced Peninsula regiment having seen action at Salamanca, Vitoria, Nivelle and Nive, with a few men even having served as far back as Egypt in 1801. 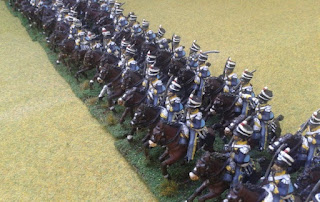 The only other officer in Number 1 Troop was Lieutenant John Vandeleur, the son of Sir John Ormsby Vandeleur, commander of the brigade. ieutenant Vandeleur had served in the Peninsula, initially with the 71st (Highland Light Infantry) before transferring into the 12th Light Dragoons.  He later commanded the 10th Hussars and received an MGS with 5 clasps. 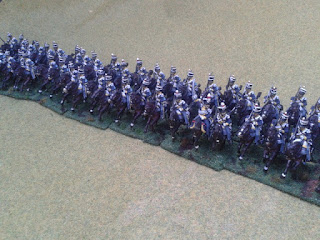 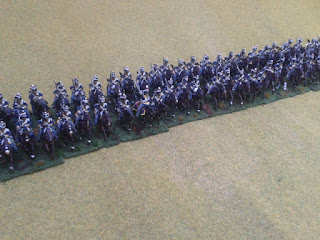 Regimental Serjeant Major Carruthers led the troop in the clash with the French lancers at Waterloo,
“…the first lancer came bravely on and the gallant Serjeant Major resolved to grapple with him single-handed…The lunge of the Frenchman was dextrously parried and the sabre in an instant thrust through his body.”
He was commissioned on 26th October although by the end of the following year his name was on the half-pay list. 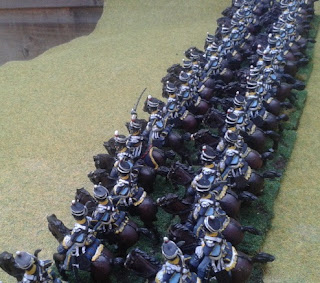 The commander of the 12th, Lieutenant-Colonel ‘Fred’ Ponsonby, was wounded on the French ridge, up amongst their guns, having fallen “into the same error which we went down to correct” – that is, having got carried away and gone charging off instead of forming up and maintaining discipline. His account of the ordeal that followed is often recounted in Waterloo books. 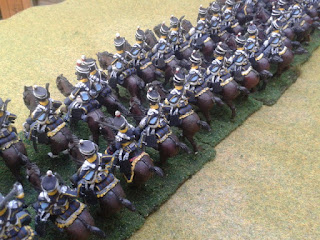 While lying on the ground he was skewered through the back by a passing lancer and blood gushed into his mouth.

He was then robbed by a French light infantryman but received kinder treatment from a French officer who gave him brandy. Another tirailleur appeared who "knelt and fired over me, loading and firing many times, and conversing with gaiety all the while. At last he ran off." Later in the day he was trampled over by Prussian cavalry “lifting me from the ground and tumbling me about cruelly.”  As night fell he was again rifled for plunder, this time by a German soldier. Help came at last in the form of an English soldier who stood sentry over him until morning when he was taken to a farmhouse and placed in the bed from which Sir Alexander Gordon had just been carried out dead. 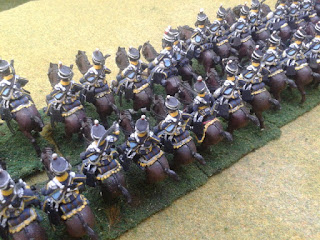 Fred Ponsonby recovered from his wounds despite the best efforts of Assistant-Surgeon Smith who bled him continually, and lived until 1837. He married Emily, the daughter of Lord Bathhurst, in 1825 and had three daughters and three sons, one of which served in the Crimea and was private secretary to Queen Victoria. 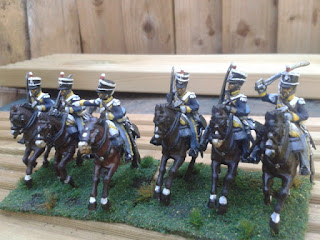 This is yet another fantastic set from the Perrys, beautiful clean castings and the mountain of surplus pieces offers wonderful opportunities for conversions. They were certainly easier to paint than the hussars - no pelisse, no intricate lace on the chest and cuffs, although I found the shakos quite tricky to get right. My basing seems to be getting worse, and something needs to be done. I've been reading about DIY static grass applicators and I might try and give that a go.

Next up is a troop of the 23rd Light Dragoons (pink facings!) - but I might have a little break first.  Perhaps a company or two of highlanders for a "relaxing" change.