The last few weeks have been spent finishing off these guys and it took a lot longer than I had expected. As far as I was concerned I had nearly finished this unit a few years ago - they just needed a few little details and a few extra men. However, like the Firth of Forth of Bridge (the moment you have finished painting it, it is time to start painting it again), by the time I got round to finishing these guys my painting had improved and the old faces looked so badly done that I had to redo the whole lot!

So I repainted all of the faces and most of the tunics and added about 30 new guys, the command, some casualties etc.
The 42nd had suffered so badly at Quatre Bras - caught out by the long corn, French cavalry had caught them in the open - that at Waterloo the regiment numbered barely 200 men. This then, is an acurate depicted of what their square would have looked like at Waterloo - surprisingly tiny. 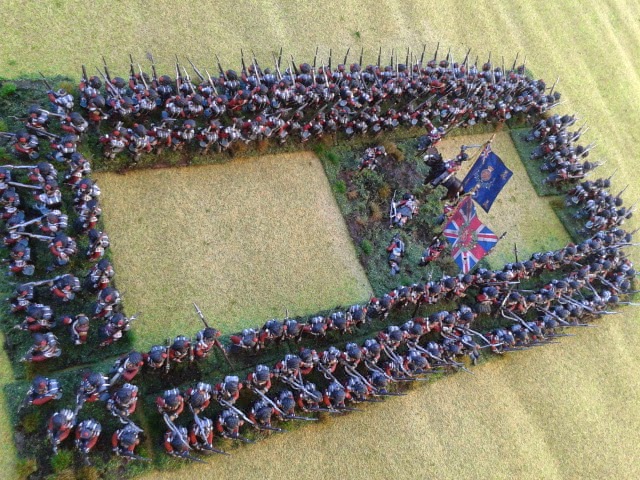 I suspect that such a small unit would have needed to be merged with another - the 44th in their brigade was even more reduced in number - so perhaps the two regiments formed one square. This had happened at Quatre Bras and we know that the regiments of Halkett's brigade did so at Waterloo (33rd & 69th, 30th and 73rd). There's no primary evidence for this (that I know of) but it makes sense I think. 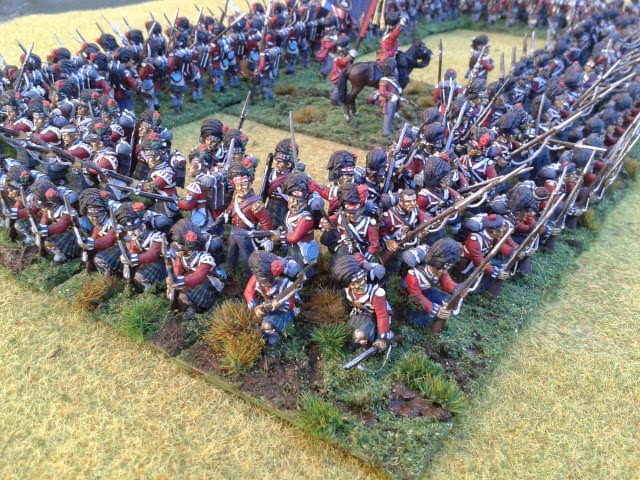 This is the first square I have done where I have added special corner pieces. I'm like them, they make the square look much more realistic, and (one day!) I shall go back and add corners to the other completed squares. 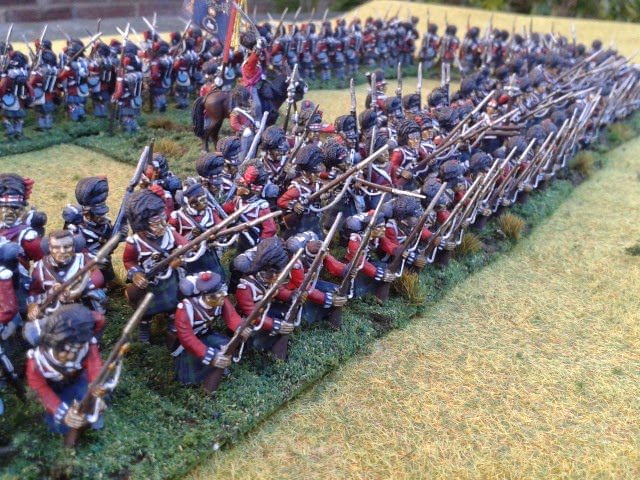 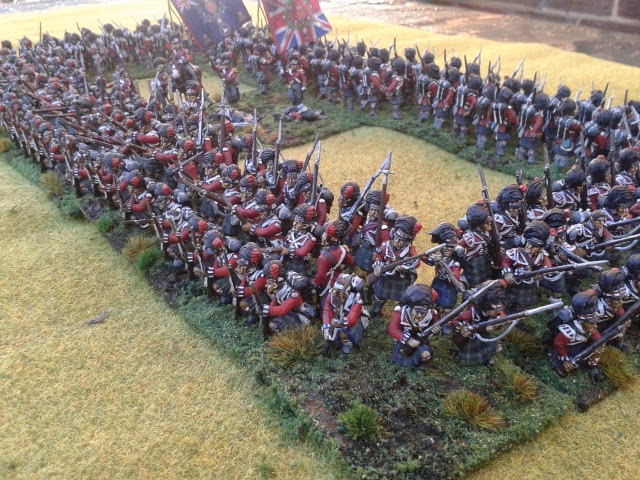 The figures are mostly Victrix with a few Foundry, Perry and Front Rank. Huge thanks to Steve and Julian at Victrix who helped me out massively by letting me have some extra kneeling rank. 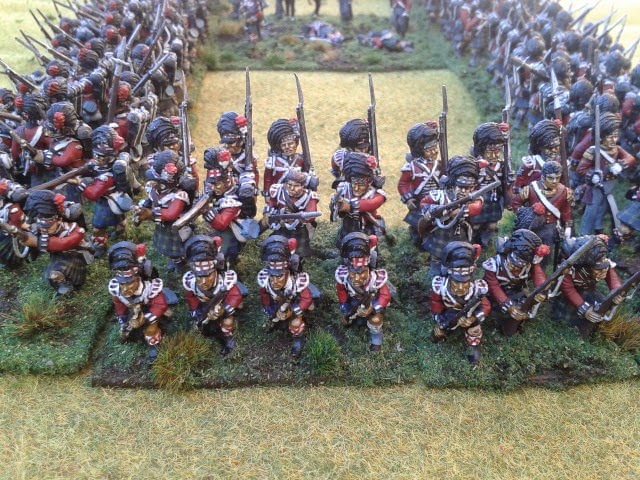 The Grenadier company. One of the many unique quirks of the 42nd, besides the unusual plumes etc, was that the Grenadier Company was Number 2 and the Light Company number 3 (normally, regiments numbered them 1 and 10 respectively). The Grenadier company marched from Brussels with a nominal strength of 71 me but suffered severely at Quatre Bras. As with the rest of the regiment, the level of experience in the ranks of the Black Watch may rank among the highest of any on the fields of Waterloo (including the French Old Guard). This is a bold claim to make but many of these men had been fighting since the late 1790s. They had fought in Egypt, in the Coruna compaign, and then for four hard years through Portugal, Spain and France. Only 18 men of the Grenadier Company lived to receive their Peninsula War medal in 1848 (or bothered to apply for one).  These 18, however, give an indication of the experience of this battalion being awarded a total of 99 clasps including 8 clasps for Coruna.  The other companies contain similar numbers. 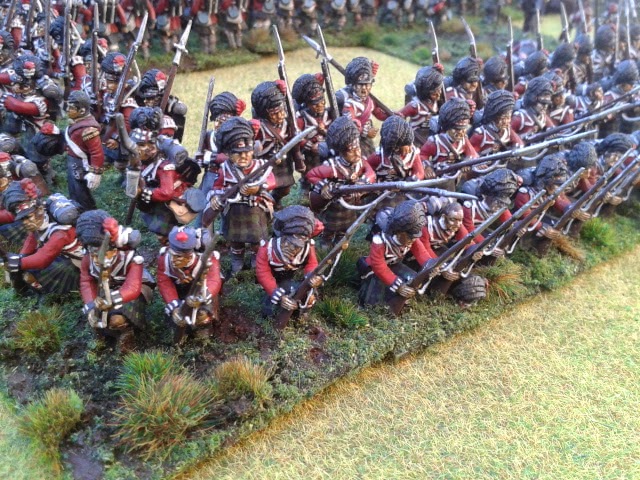 Here (on the right) is Number 8 company - this was perhaps the best place to be standing at Waterloo - it lost no men! (all of its casualties had fallen at Quatre Bras). The most common places of origin for men in this company were Aberdeenshire and Invernesshire. Unusually, however, it contained four non-Scots – William Mitchell and James Wylie 2nd from Armagh, Timothy Driscoll from Cork and Benjamin Vint, from Potson in Yorkshire.
The old chap kneeling with his bonnet off is JamesWylie (the 1st). Born in Perth, he had first served with the Banffshire Fencibles from 1798 before joining the 42nd in 1802. He was discharged in 1817 aged 40 in consequence of being consumptive. He was only 5' 3" tall! 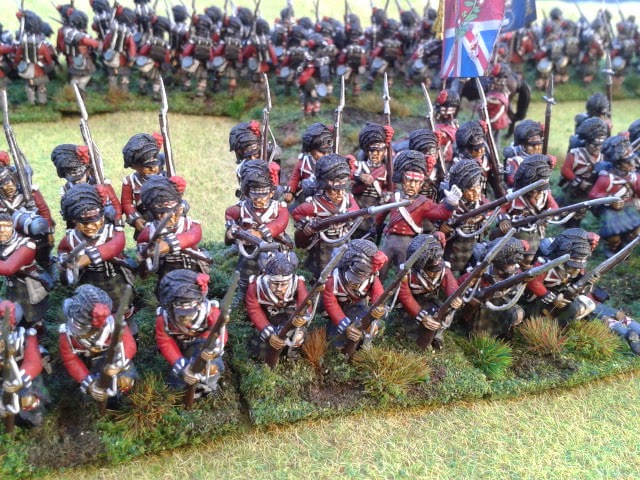 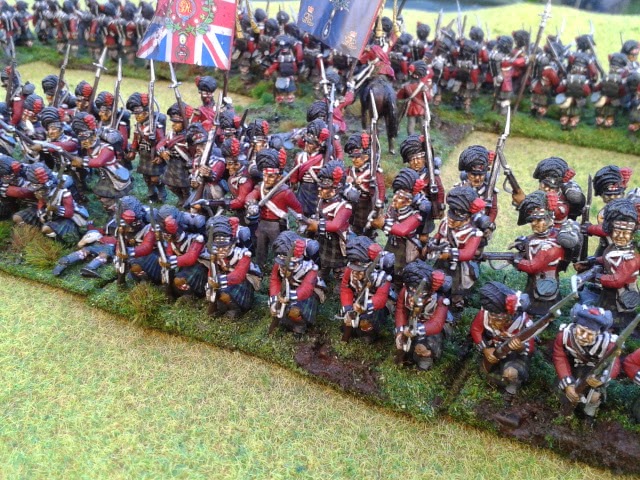 Here is Number 7 Company which  suffered the high casualty rate in the battalion. This may be because it seems to have suffered more at Waterloo than others . Captain Mungo McPherson was the only Captain in the Regiment wounded on that day and both Colour Serjeants were also wounded on the 18th.  Amongst the dead, Privates Fraser, Greenhill and McKerrie were all killed at Waterloo.


It was the the third time Captain McPherson had been a casualty,  having been wounded at both the Nivelle and Toulouse.  He retired as a Major in 1826 and died at Hastings in 1844. 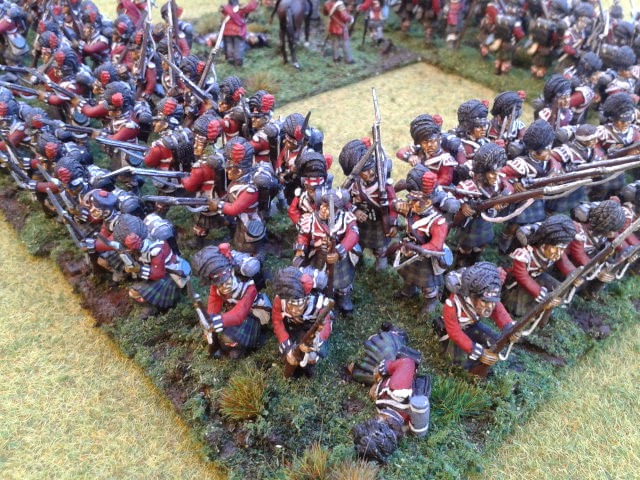 On the right is the Light Company - it had suffered particularly badly at Quatre Bras and, in addition to the killed and wounded, 6 men had been taken prisoner. At the corner, holding the extra canteen (thirsty work), is Corporal John Arnott, who was wounded in the right breast at Waterloo.  From the Gorbals he had enlisted in 1802 aged 19 and served throughout the Peninsula – from Coruna to Toulouse.  He was discharged in 1824 and was granted a pension of 1s 11d per diem.  He died at Bridge Street, Rothesay, in 1864. 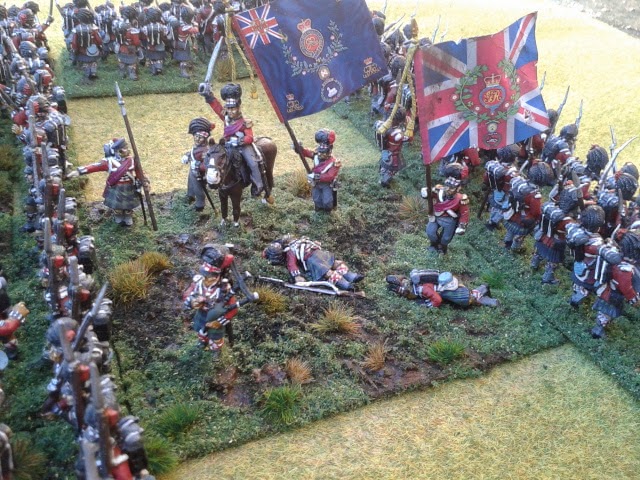 I think I've put the flags on the wrong side (I'm new to flags) - the union jack should go on the right officially I read yesterday. I'm not too bothered - hopefully this applied when marching in square or forming line - I can't imagine when you were huddled in the middle of a square surrounded by French cavalry, you bothered too much about which side was right and which was left! 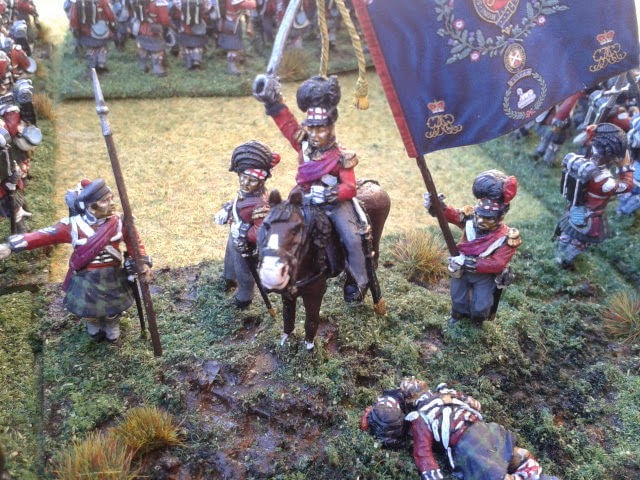 All of the senior officers had either been killed or wounded at Quatre Bras so the regiment was commanded at Waterloo by Captain John Campbell. He had received a gold medal in the Peninsula for his conduct at Orthes and had rallied the regiment at Toulouse.  In 1831 he married a Parisian woman Louise Gabriell Clementine Bernie and died at Marsailles in 1841. 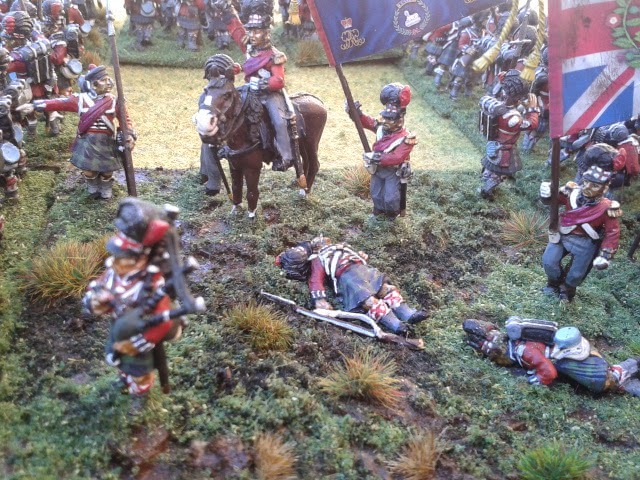 We don't know who carried the Colours at Waterloo - presumably anyone who was left standing! 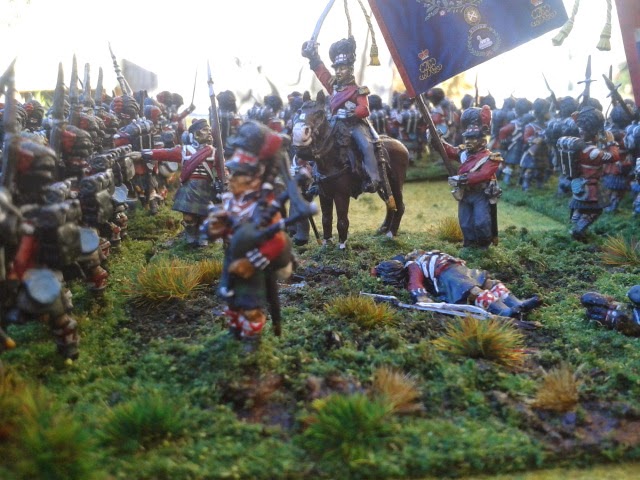 I like these pics inside the square - they give a good idea of what it was like I think, though I will have to add some drummers and a lot more casualties! 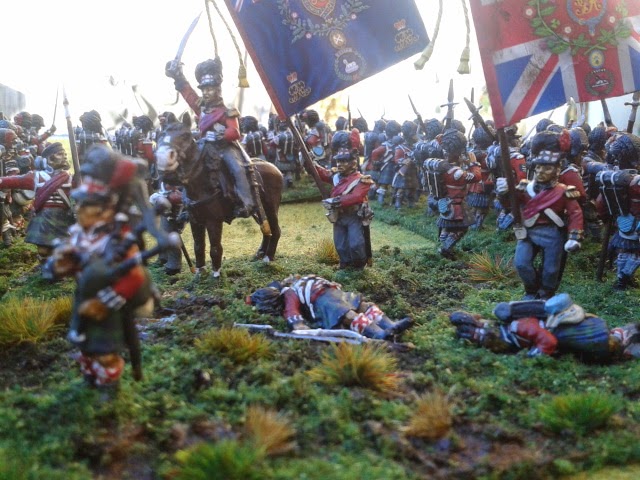 I've got most of the next week off and I'm going to try and do a marathon stint on the next job - the 44th Foot (East Essex) - to complete Pack's Brigade. The 44th, understrength even before the campaign had started, were so reduced after Waterloo that they could form only four companies. I'm therefore going to do four companies of 40. As mentioned above, I imagine such a small unit would have been merged with another to form square. 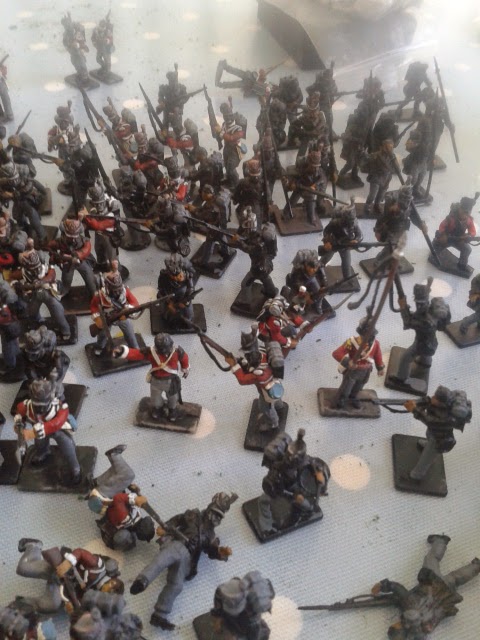 Watch this space! Hopefully I'll have them completed and posted here by next week!