These have taken a while - I've been working on them on and off over the last year whenever I needed a break from scarlet tunics. Various sources mention that the 15th wore shakos at Waterloo and while I've done the 10th in their glorious red shakos, I decided this lot would look a bit more "campaign" and thus modified them all to have covered shakos. I really like the "rag-tag" look of this lot - they were a hardened load of veterans and colourful characters from the Peninsula, so I think it suits them. Figures are a mix of Perrys, old Foundry and my own Frankenstein creations. These last were made with spare French hussar legs, Warlord horses, and various Victrix/Perry arms and heads. Ages ago I asked if anyone had any spare legs and received two very generous donations from Stefan Schultz and Fons at Mabuhay Miniature Painting Service  http://www.mmps.asia/ - so thanks very much again guys! Here at last is the completed project! All the heads have been converted (using Perry French infantry in covered shakos). 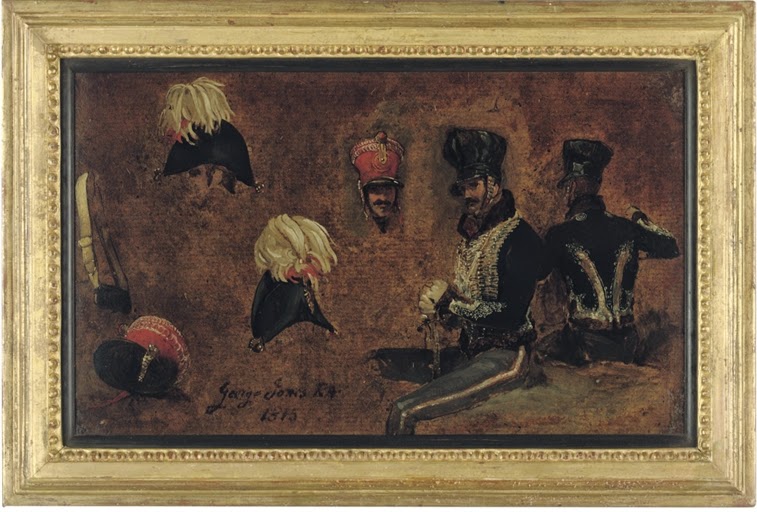 In addition to some sources mentioning the 15th in shakos I was also swayed by this premlinary sketch by the artist George Jones for one of his Waterloo paintings in 1815. Sold at Christie's for £2,100 in 2008, it shows his preparation for a larger painting through copying the details of various uniform details - there is a beautifully detailed shako of the 10th Hussars but it's the full sketch of the hussar that I found so interesting. Maybe it's not a hussar from the 15th - it could be a Prussian or some KGL unit - but whatever, it does clearly show how shakos were covered in oilskin. If it IS an officer from the 15th then I have painted all the trousers stripes the wrong colour! Most sources show them as red, but this chap's are clearly white. I'm not going to lose any sleep over it, just thought it was a fascinating painting. 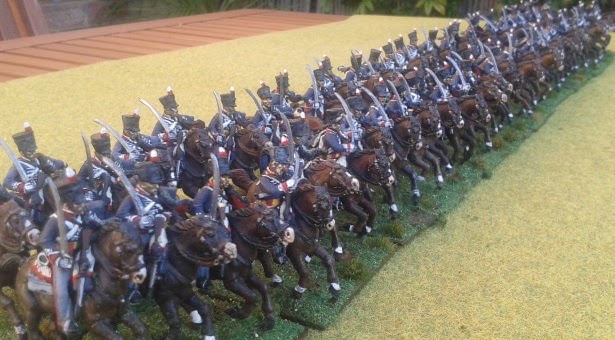 The 15th Hussars had a nominal strength of 460 men (and thus probably an actual strength in the field of around 390 men divided into 6 Tropps. These 60 therefore show No.1 Troop. 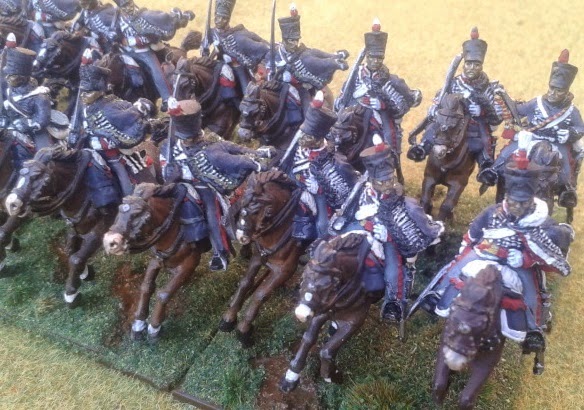 Being stationed on the extreme west of the battlefield, the 15th saw little action at Waterloo and sufered relatively minor casualties, most of which came from artillery fire. Wheeler of the 51st Foot, posted nearby, recalled, “A shell now fell into the column of the 15th Hussars and bursted. I saw a sword and scabbard fly out from the column.” 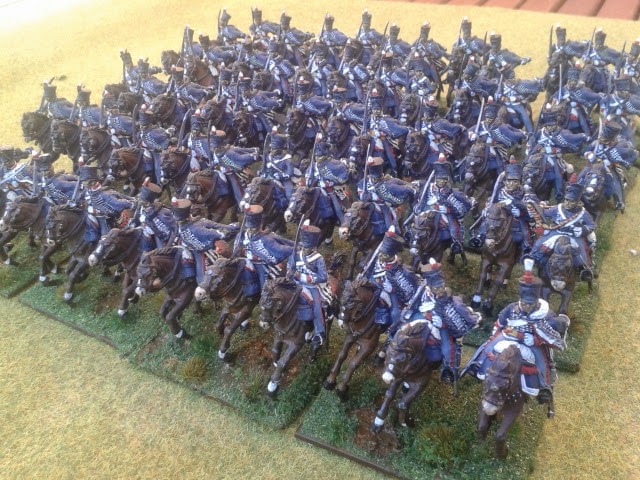 The Regiment was predominately English with only a handful of Scots, Welsh and Irish. The most common county of origin was Wiltshire, with Berkshire, Hampshire, Somerset and Middlesex also strongly represented. 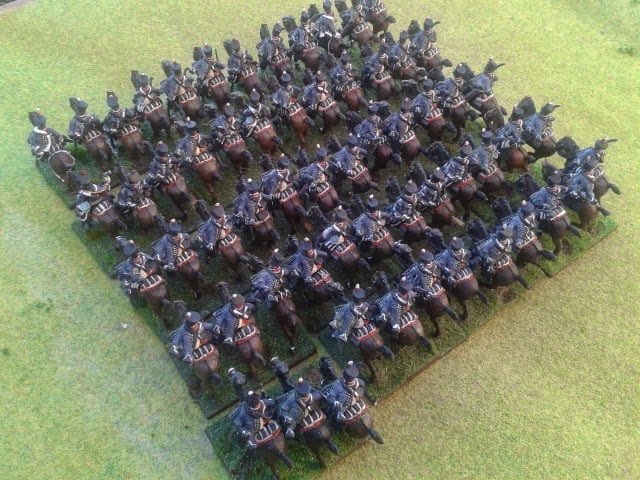 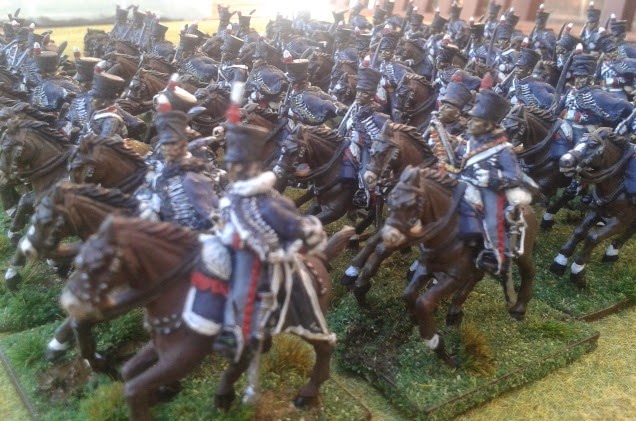 No.1 Troop was also known as "Wodehouse's Troop" being commanded by Captain Philip Wodehouse (front above). Wodehouse was a Peninsula veteran and had received two musket balls through his shako at the siege of San Sebastian. The National Army Museum holds a letter penned by him on the day after Waterloo – written, he says, on the battlefield using a drum as a desk – addressed to his beloved, a Miss Parry. The brief note assures her he suffered no harm in the battle and closes "if a cannon ball hits me tomorrow I believe I will die thinking of you."  He later rose to be a Colonel of the 1st Life Guards and retired in 1837.

To the right of his Captain rides Serjeant Thomas Bishop who had served with the regiment since 1800. From Stoke-under-Ham, Somerset he was aged 33 at Waterloo. Behind them rides Regimental Trumpet Major William Hyde. 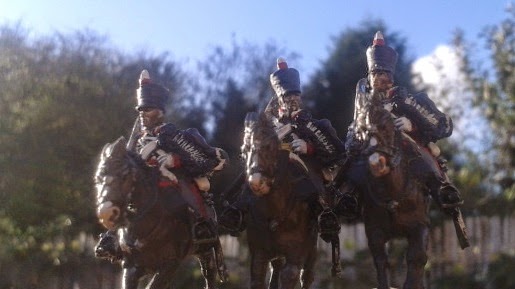 Three characters of No.1 Troop - Private Adam Brewer was born in Middleheim in the German States. He had enlisted in 1805 and took part in the Coruna campaign, seeing action at Sahugen. He later returned to the Peninsula and was present at Vitoria, Orthes and Toulouse,

Private Samuel Morgan, from Amersham, had worked as a saddler before joining the Regiment. He had served in the Peninsula from 1813-14.  He died of his wounds at the General Hospital, Brussels, on 5th July.


Private Robert Daintry, also wounded (in left shoulder). Born Pangbourne, Berks, he enlisted in 1804 and served in the Corunna campaign and later at Vitoria. He was discharged shortly after Waterloo and in 1843, then aged 57, was admitted as a Chelsea Pensioner.

I've now done a squadron of each of the 4 British hussar regiments. I'm still building more, so next I suppose I need to start working on a second squadron of each. As long as I live to be 324, I should have everything completed eventually.