I've been working on these two squares since January and can finally (pretty much) put them aside and tick that box. I still have to complete two of the four light companies and do the command stands for the 33rd and 69th, but the rest is pretty much done. As mentioned before, the 30th/73rd are a mix of Perry/Victrix/Foundry and some other makes, while the 33rd/69th are 99% Victrix. Praise the lord for plastic 28mm! Without the advent of these I'd never have embarked on this madness. 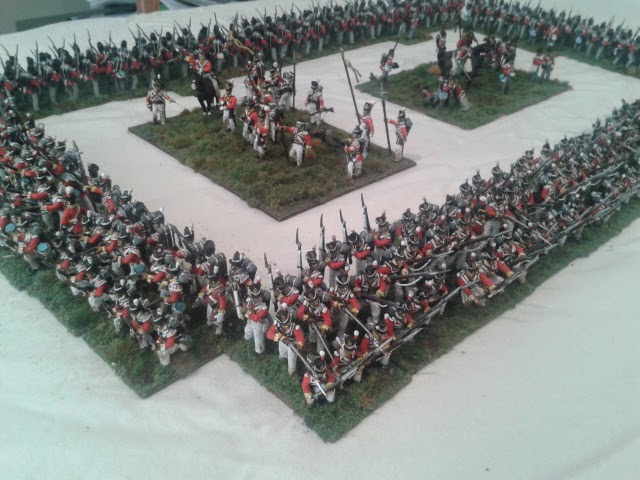 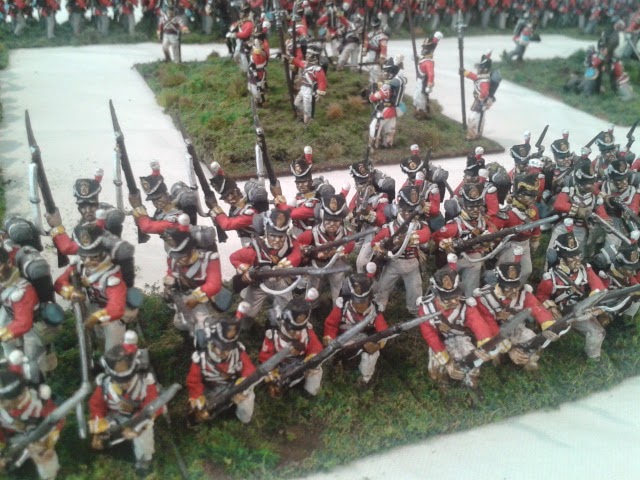 Of the four regiments in Halkett's Brigade only the 30th, wearing white trousers in 1815, could be considered a veteran battalion. They had seen action at Fuentes D'Onor, Badajoz and Salamanca and this greater experience perhaps explains their more solid performance at Quatre Bras which, to a large extetent, spared them the mayhem and casualties of the other three regiments. 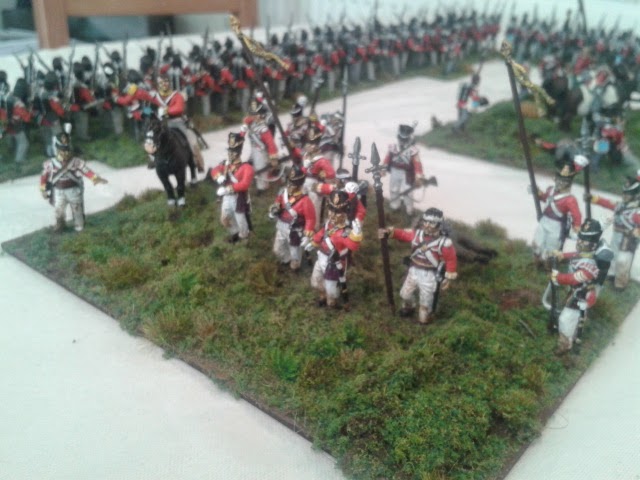 One day I will get round to adding some flags! The 30th were without their Colonel, Alexander Hamilton, who had been wounded at Quatre Bras. As a result the regiment was commanded for most of the day by Major Thomas Chambers (seen here at the front) before he fell, tragically killed with one of the last shots of the battle.
The mounted officer is Lieutenant and Adjutant Matthias Andrews. 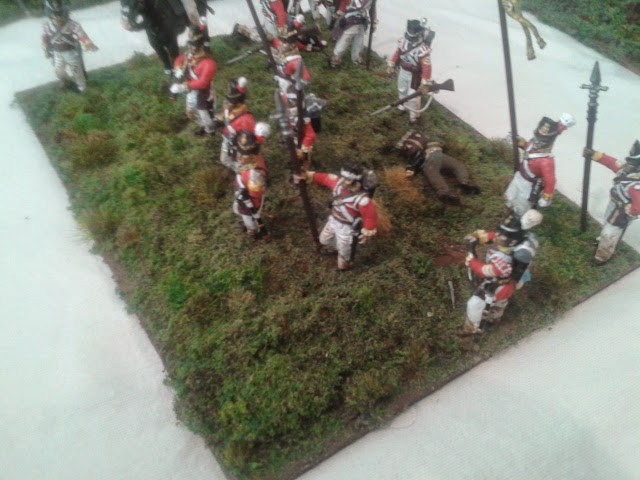 An errant Nassau casualty lies among the colour serjeants of the 30th. I need to get some sort of mat or terrain to take pics - I know this white sheet doesn't look great! 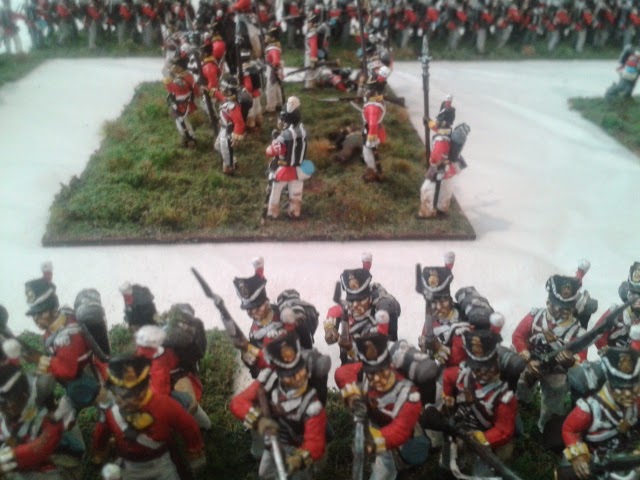 Many of the men of the 30th were Irish, with the largest number coming from Tipperary. 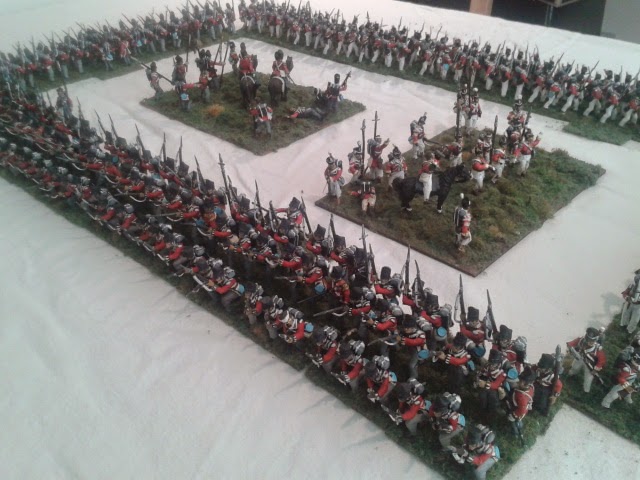 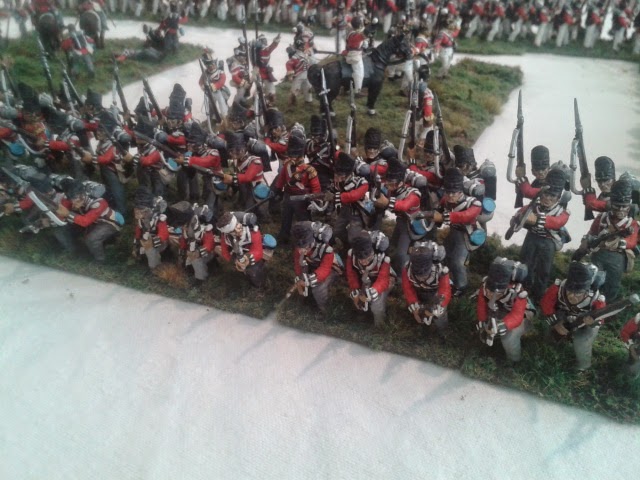 The 73rd Foot, though once a Highland regiment, had long ago abandoned its kilts and the great majority of its rank and file consisted of Englishmen (291 men) and Irish (133), with only 58 Scotsmen. 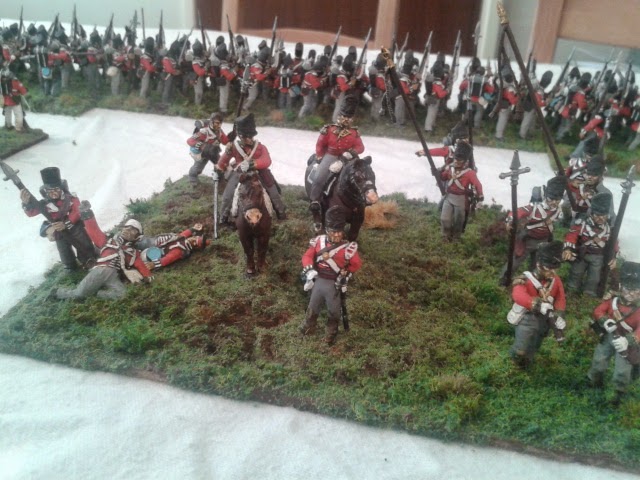 Here is the command party of the 73rd. On the right is Lt-Colonel William Harris.  An account of Waterloo relates "Despite heavy losses only once did the 73rd hesitate to fill a gap torn in their square, Harris pushed his horse lengthwise across the space saying, "Well, my lads, if you won't, I must." He was shot through the shoulder late in the day.
On the left is Ensign and Adjutant Patrick Hay. He received a severe wound through the left arm breaking the bone. He had earlier been knocked from his horse and recieved severe contusions from the bursting of a shell. He had previously been the Regimental Surgeon but through friendship with Colonel Harris was able to exchange to an Ensigncy. He received a personal commendation from Halkett for his bravery at Waterloo. 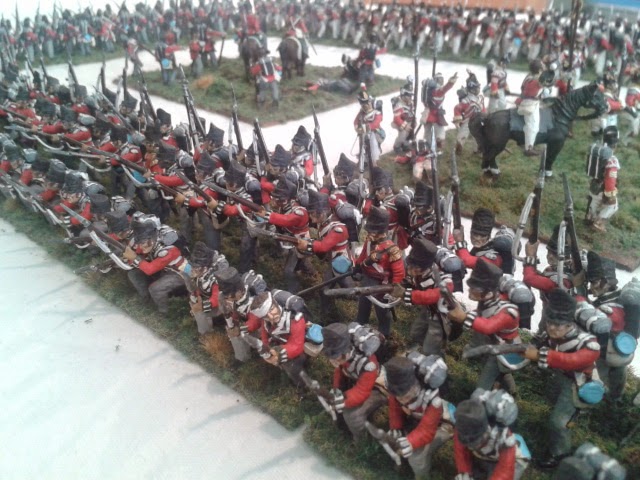 The year after Waterloo the 73rd were posted to Ceylon where yellow fever would kill far more men than had lost their lives at Quatre Bras and Waterloo combined. 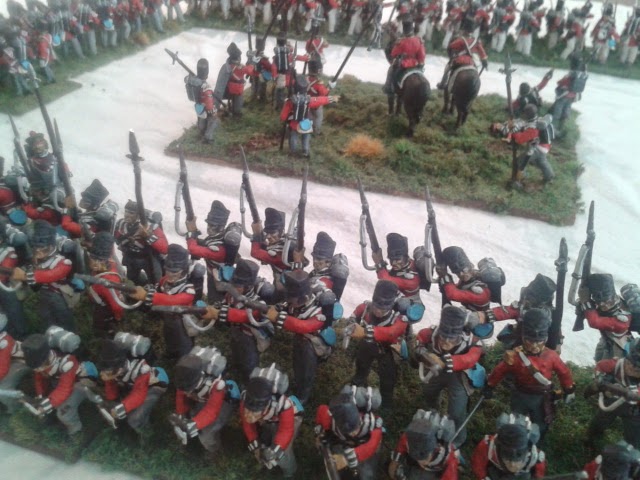 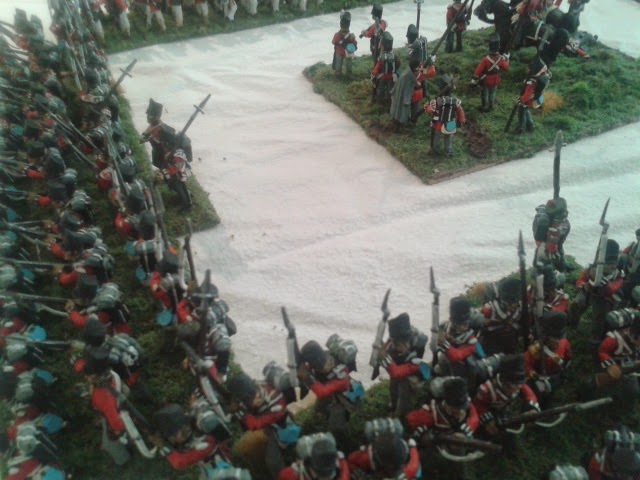 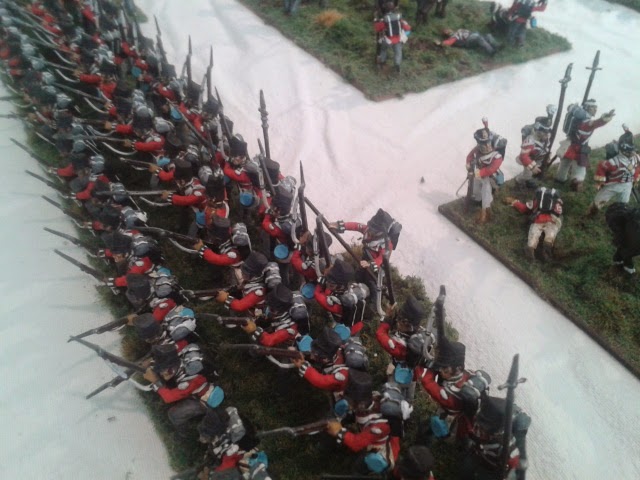 A Serjeant keeps the lines straight through judicious use of his pike! 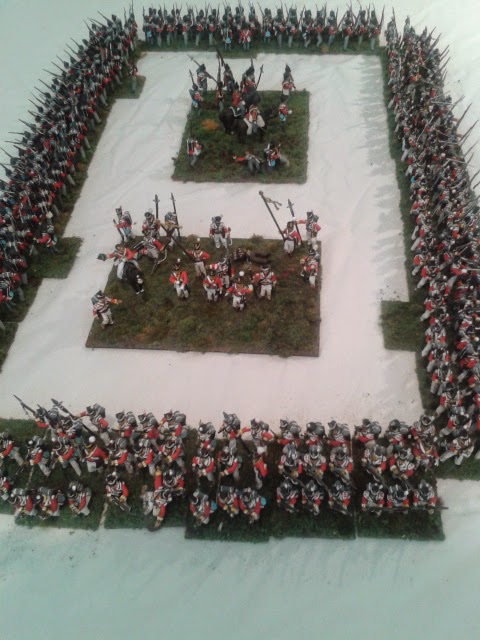 There are only 18 companies in the square - the two light companies combined with the light companies of the other square to fight as a light battalion, skirmishing in front of the two squares. I've nearly finished them, will post pics when they're eventually done. 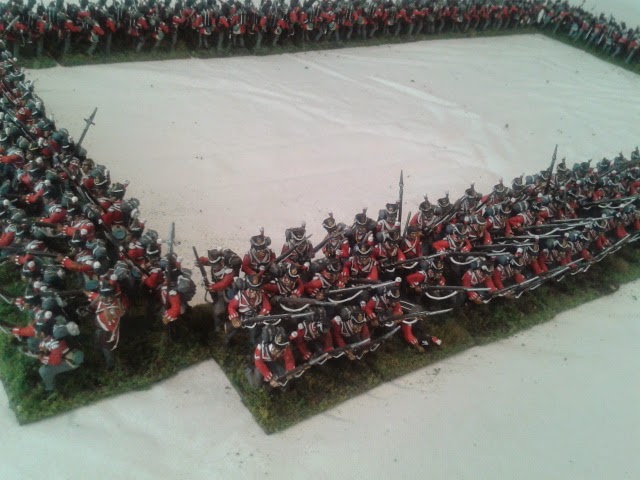 Here is the other square  - the 33rd (West Riding) and 69th (South Lincolnshire) combined together due to the severe casualties they had suffered at Quatre Bras. As well as the command groups I want to add lots of other debris - ammo cases, powder barrels (thanks TMP guys), muskets and drummers, plus more dead, dying andwounded. 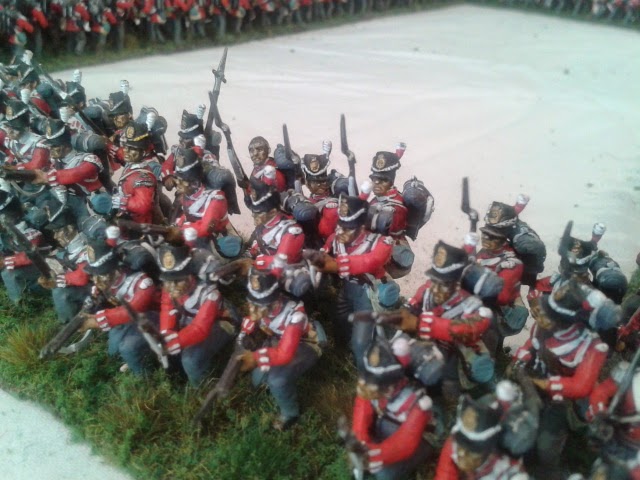 Unlike most British regiments the 33rd (West Riding) Foot did actually contain a large number of men from Regiment's "county name" - there were a large number of Yorkshiremen, particularly from Leeds, Keightley and Sheffield 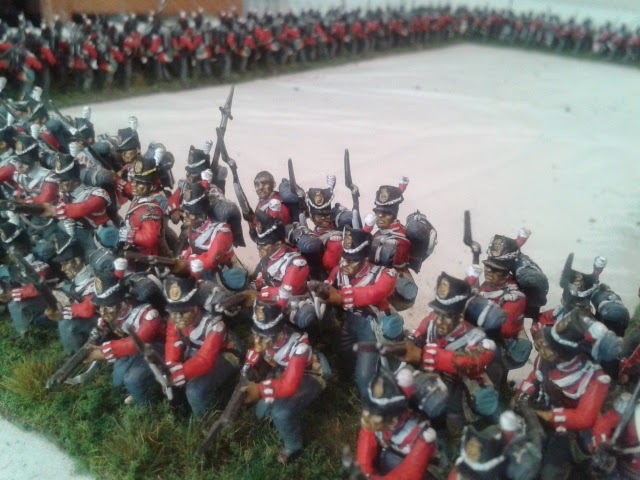 Both the 33rd and 69th were relatively inexperienced (neither had served in the Peninsula. In the first attack of the French cavalry the combined square square broke and ran away in disorder. That they were not then completely anihilated was thanks to the intervention of the Life Guards who arrived in time to see off the French curraisers. The square was then reformed in its original position and remained there, ablbeit often shakily, for the rest of the day. 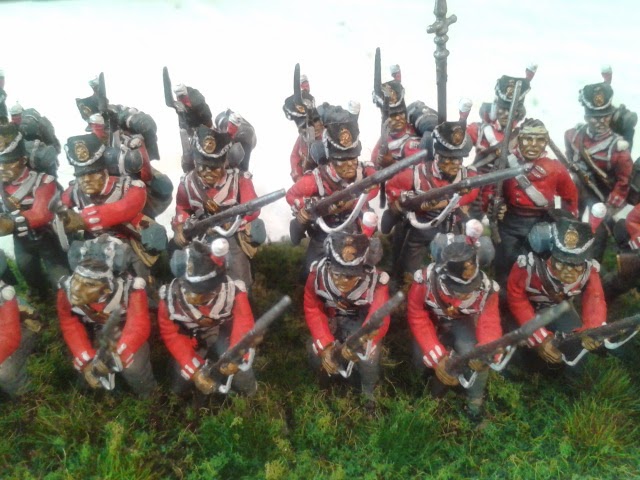 Looking through the pension papers of these men at Kew, the number of sabre wounds to head and hads suffered at Quatre Bras is noticeable. These impassive, burocrat remarks, scribbled on pension forms "sabre wound to both hands 1815", "wound to scalp and loss of eye 16.06.1815" etc. conjure some of the horror that these men must have experienced as the big French horses broke through the tall corn and among their scattering ranks. 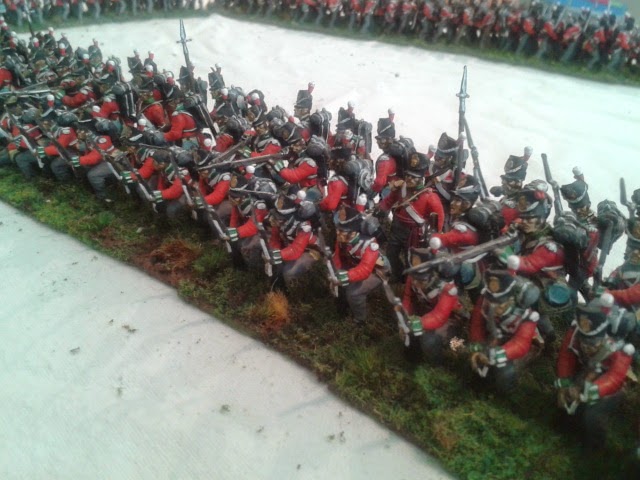 The 69th Foot consisted, approximately, of 57% English (Lincolnshire and Essex being the two most common counties of origin), 35% Irish and 7% Scottish. 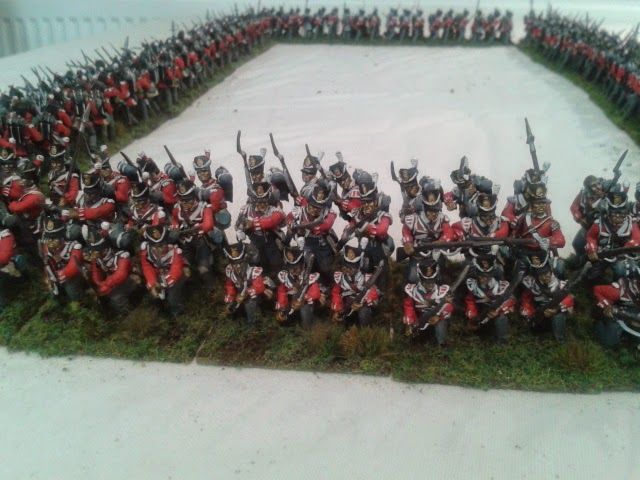 I'm still working on the command groups for this square. The 69th had lost their King's Colour at Quatre Bras (so I won't need one!) and at Waterloo the 33rd, fearing the same disaster was about to befall them, sent Ensign Smith (a veteran ex-Marine) to the rear with one of theirs. Seems odd to only send ONE colour to the rear, so I'm not sure whether to depict the 33rd with both colours, just one, or none!

I still need to actually do Halkett himself and his ADCs, and will have to squeeze them into one of these squares.

Not sure what to do next - maybe some artillery, maybe some hussars - maybe even some green-jacket Hanoverians - anything to have a break from red tunics and endless intricate white lace!

I'm hoping to move home (again) in the next few weeks. The new place has a shed - it's tiny but I might at last be able to unpack some of my Waterloo army and put them out on shelves rather than have them living permanently in boxes. I look at blogs from lucky guys in Canada/New Zealand/Australia/anywhere except this massively overpriced little country, and weep at the space that most people seem to have as standard. Anyone buying property in south-east England can only dream of such luxury!

Anyway, it might be a while before I get any time for this project, but will try to get back in the saddle soon!
Posted by Lord Hill at 17:06