This whole project has only been possible thanks to the advent of excellent plastic 28mm figures from Victrix and Perrys. I think these came out around 2008, so I have been assembling them and building my Waterloo army for 6 years now. It was really exciting, therefore, to hear that a third company would be introducing a range - Warlord Games launching British infantry for both the Peninsular and Waterloo.

My first box arrived this week and  I spent an enjoyable afternoon yesterday assembling them.
All the figs are in marching poses which, for my purposes (the static position of the Waterloo line) isn't really what I need. That said, I have two units marching - the 27th (line) and the 71st (light) - and so these figs can be added to those ranks, the flank figs (with epaulettes) joining the 71st.

I somehow managed to order a box of Peninsular infantry by mistake - and my 28th foot (the only regiment in stove pipeshako at Waterloo) are in firing line, so I decided to add Perry heads (like the rest of the 27th) and Victrix heads (like the rest of my 71st). The tricky thing about this was that, unlike Victrix and Perry, Warlord heads are attached to the collar. Thus, I had to cut off all the collars and glue them onto the figs, then glue the Perry/Victrix heads to these collars. Fiddly, but I love making these kind of Frankenstein hybrids.

The Warlord heads are actually fantastic, I love them - full of character without being too "cartoony" and have already ordered a second box (Belgic shako this time!) which I will use, un-Frankensteined for more 27th Foot.

Interestingly, each box comes with a metal command - two standards, an officer, a serjeant, a sapper and a drummer. This seems to make the £18 per box seem even better value - more like £13 per box in terms of the plastic figs!

However, I'm not really sure what I'm supposed to do with the 2 standards - their hands are cast shut - am I really supposed to drill a hole through their clenched fists? 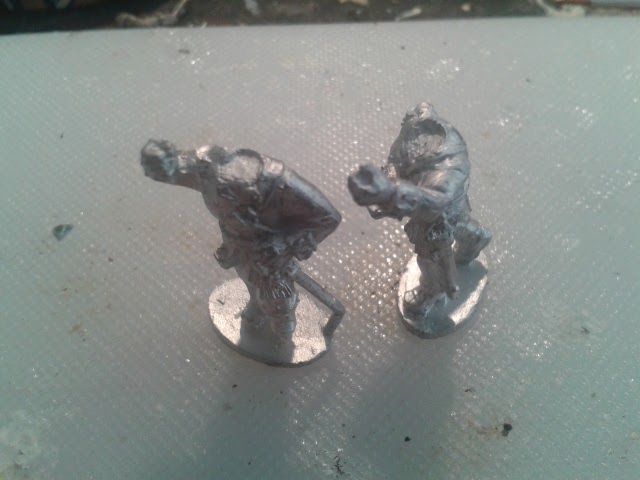 But I don't really care - the one thing I don't need more of is standard bearers - thanks to Victrix's 4 per box and Perry's 2 per box I have a plastic bag of standard bearers somewhere under the stairs containing over redundant 100 figures! 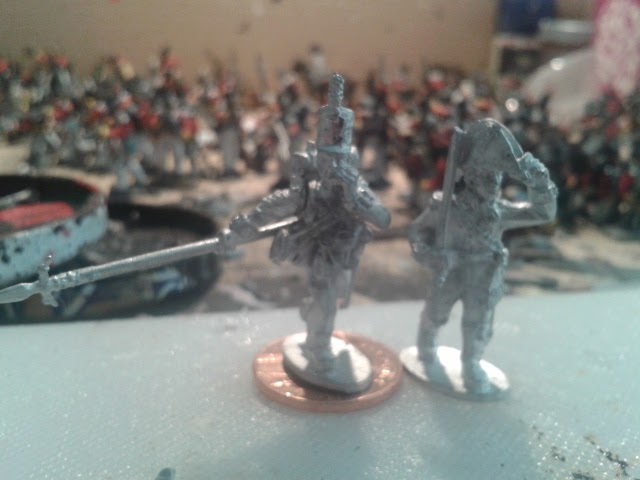 Much better are these two wonderful figs. Sadly I won't be able to use the Peninsular officer - a lovely casting - but I might paint him up and try to sell him to raise some funds. The serjeant is simply excellent and is one of my favourite figs ever - he will say goodbye to his comrades and go and join the ranks of the 28th, patrolling at the rear of the firing line, yelling encouragement, and keeping the line straight with his pike. 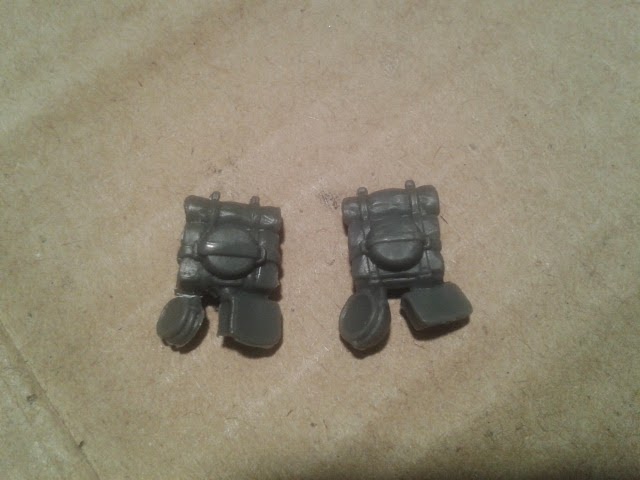 One thing I've always wondered about is the relationship (or lack of) bewteen Victrix and Perry.  It seems remarkable that 2 companies would launch such similar products almost simultaneously without any cooperation/agreement.  The fact that arms/heads/etc fit so neatly on each other's models has been a wonderful godsend for me and, I'm sure, many others, but how do THEY feel about it?
Now, Warlord has added to my head-scratching...
Look at these two identical backpacks. But  wait, they're not identical. The one on the left is from the Perry box, the one on the right is from the new Warlord box. Do Warlord have to pay royalties for copying the design? Or do the Perrys not care? Are all the manufacturers friends and have a nice laissez-faire attitude to each other's ranges?
These are the things that I sometimes think about while gluing endless bits and pieces together!

Anyway, I hope Warlord extend their range of British Napoleonics - I really like them. Perhaps they will be the guys to finally bring out a box of heavy British cavalry (with different heads you could have dragoons, dragoon guaurds, and Scots Greys all in one box) and enable my charge of the Union Brigade to finally come into fruition!