It's been a very hectic few months - moving home, new job, - and this blog has suffered accordingly. To a lesser extent  the Waterloo project has also been neglected; I haven't had much opportunity to do much painting and my new flat - cramped and dark - is even less conducive to productivity than my old London hovel!
But I have managed to get started on the enormous 4th Foot. Much of Wellington's army had been so knocked about at Quatre Bras that their nominal strength on the 18th June was down to a couple of hundred men. For the Black Watch, for example, I think I've actually painted too many figures! There were probably no more than 180 men in the field at Waterloo and thus I can get away with companies of 18 men or so.
Not so Lambert's brigade which consisted of the 4th, 27th and 40th Foot. Absent from Quatre Bras they were at full strength at Waterloo and this means that I'll need at least 600 figs each for the 4th and 27th Foot and a whopping 800 or so for the 40th. 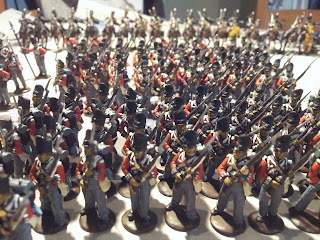 My camera is also caput so these pics were taken using my phone and are not great. 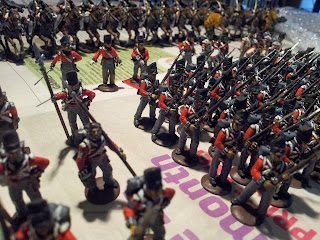 As well as the 4th, I've also had fun assembling the 15th Hussars. Stationed on the far west of the battlefield they didn't see much action but I've been keen to do them as I wanted to have them in covered shakos. Many sources show them as in busby but I found a contemporary sketch somewhere (which I now can't find!) which showed them clearly wearing a shako in oilskin covers. So I scratchbuilt these using French infantry heads with plumes grafted from spare Perry hussar heads. 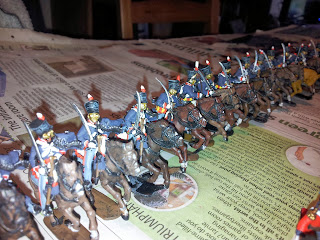 Terrible pic and still work in progress but you get the gist.