Here at last are the 106 men of A squadron of the Scots Greys - comprised of No.1 Troop (Bernard's) and No.2 Troop (Payne's) 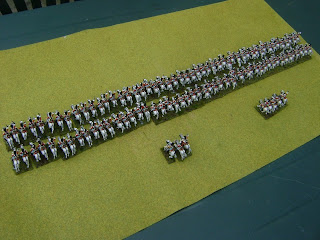 These have taken me months, I lost nearly five weeks with holiday abroad and visitors staying, but I've enjoyed doing them - they're great figures from Foundry and Perrys, and a joy to paint. 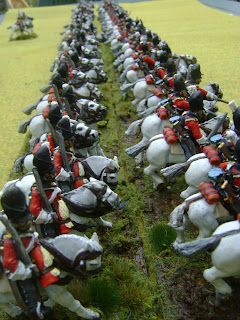 Captain Charles Bernard, commanding the right squadron, was the elder brother of Cornet Bernard of the King’s Dragoon Guards. Both were killed at Waterloo.  Their mother died upon learning of her sons’ deaths. Another brother, Francis, had already died on service in Portugal. Charles was born in 1790 and had previously served in the 38th (1st Staffordshire) Foot and the King’s Dragoon Guards. He had seen previous service in Germany and had been wounded whilst serving in the Peninsula. 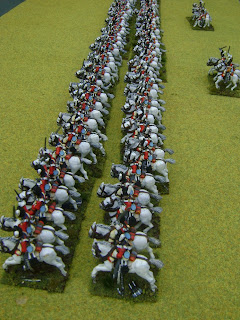 No.2 Troop was commanded by Captain Edward Payne. He quit the army a few months after Waterloo. He is reputed to have returned from Waterloo with the coat of Colonel James Hamilton (the Greys commander, killed at Waterloo) and married his widow. 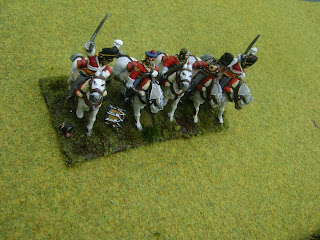 Here are Lieutenants James Carruthers and Thomas Trotter. Both were killed at Waterloo. Trotter was shot through the heart by a French officer in the first charge. Carruthers fell near Brigade commander Ponsonby who was also killed.
Between them are Corporal Hugh Wylie, who was promoted to Serjeant after the battle,  Private Will Taylor from Suffolk, still listed as wounded in December 1815, and Trumpeter Henry Stevenson. 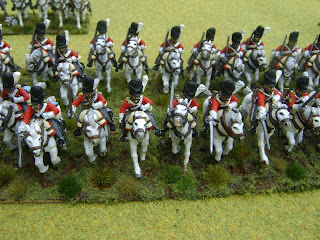 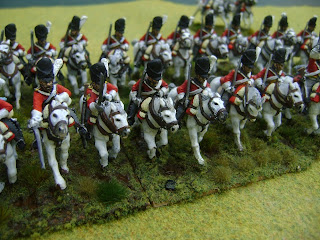 The Greys were about 76% Scottish (mostly from Glasgow) and 23% English. Over 20% of the regiment were killed - the worst casualty rate of any British cavalry unit at Waterloo. The average age was 30; Serjeant Will Porteous, above, was 39 and was discharged in 1816 having received 8 lance wounds at Waterloo. 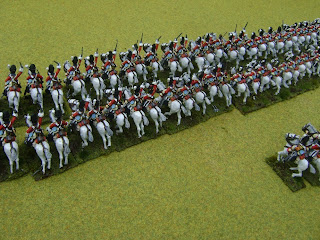 No.2 Troop (above) had a nominal strength of 77 but perhaps 15 or more of these would have been at the rear with baggage etc. The Troop lost 22 men in the battle. Just out of shot in the bottom right is Trumpeter Hutchinson who was killed in the charge. According to one account it was Hutchinson who first took the French Eagle, not Ewart, "The flag in question, and the largest of the two hanging in Chelsea Hospital, was taken in the first instance, in the first charge, by a trumpeter named Hutchinson, who, with his horse, was immediately killed;whereupon Ewart, then a corporal, seized the colour and having fought hard for it, kept it." 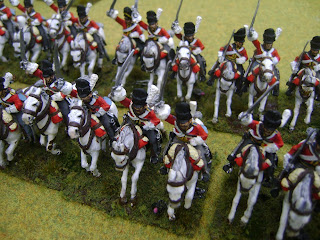 Troop Serjeant Major William Robertson was born in Renfrew and joined the Royal Fifeshire Yeomanry in 1794 aged 16 before joining the Greys. He served over 11 years as an NCO and in 1809 was recommended for an Ensigncy by General David Dundas. In 1821 he was discharged from the Greys after injuring his knee after jumping from a wall. The officer signing his discharge papers wrote his conduct had been, "most excellent in every respect. I am not aware of his having any faults… Behaved most gallantly at Waterloo." 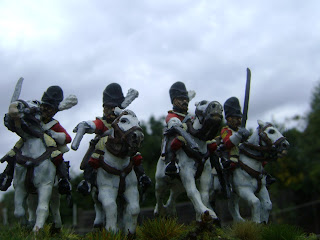 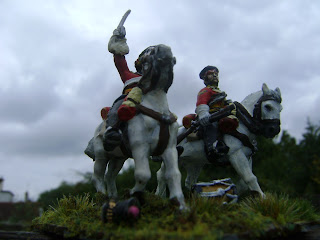