On it goes...nothing to see here, move along please... 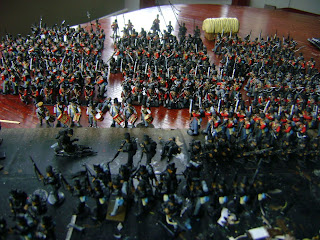 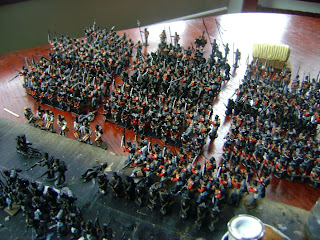 At the back you can see a mounted colonel. Unfortunately colonels are the only choice we collectors of British 28mm Napoleonics get - Perry make 2, Victrix make 2, and Front rank make 3.

So to keep every unit unique I've put a Perry head (covered shako) on a Victrix Colonel.  This doesn't solve the problem of Adjutants (who were usually Lieutenants and also mounted). Every British infantry battalion had a mounted adjutant yet nobody makes such figures which seems odd when you consider some of the more obscure figures which are produced.

The 40th would actually have had at least 3 mounted officers, none of whom were colonels - Major Arthur Hayland (who was killed), Major Fielding Browne, and the adjutant, Lieutenant William Manning. So I'll need to get to work on two conversions to make these two other chaps - I bought some Front Rank horses last week with specifically this project in mind and I shall post updates here.
Posted by Lord Hill at 13:32