Not much to report since Christmas - been working on the 40th Foot who, unfortunately for me, were not at Quatre Bras and were therefore pretty much at full strength at Waterloo which makes them - with a nominal strength of 840 -  rather a large unit to do. Last time it was tartan tartan tartan, now it's buff buff buff.

I'm going to do the 40th in square which leads to the usual problem of not having enough kneeling figures. As I understand it, regulations stated that, at full strength, a square should comprise the first TWO ranks kneeling and the third and fourth ranks standing. Even with some generous donations I would need as many as 400 kneeling figs and that is never going to sit well with my bank account. So I'm going to cheat and have only the first rank kneeling and then three ranks of standing.

Here, from much later in the century, is a company square (not battalion) so only two ranks. A formation much favoured by historical renactors (all 17 of them). 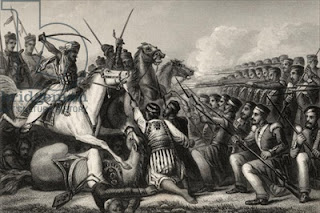 Hurrah! Only one rank kneeling! But again, from another war, and hardly a definitive historical source.

I'll just have to hope someone comes forward with a scrap of historic evidence for my 1-rank-kneeling, 3-ranks-standing to which I can cling!

So here are some very work-in-progress pics just in case anyone thinks I've been shirking the task. 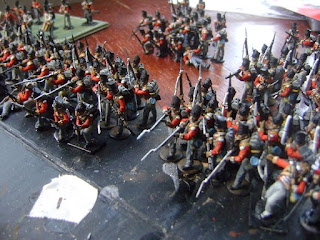 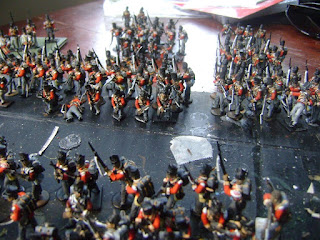