Ahoy there me hearties!

Faced with a flat growing ever more cramped thanks to my 28mm obsessions I decided to call a temporary halt to the Waterloo project and make some space. For ages I've had a shoebox full of the marvellous Abbots' naval range - half British and half French. I finally had to accept that, lovely fun figs that they are, they don't really fit into my great master plan so they would have to go.  However, in my limited experience of ebay, it seems that unpainted figs often don't do very well, so I decided to paint them. Here are my efforts with the British crews- I've divided them into 6 sets - each with a mix of sailors, guncrew, and marines, so I hope people might find them useful for skirmish games. The basing was a bit of a quandry - presumably a sandy base (which I'd been looking forward to doing) would look odd if the figs were on a ship, and similarly a "decking" base would look odd as they stormed onto the beach! So I've gone for a neutral brown base which could be adapted easily to their eventual owner's whim. 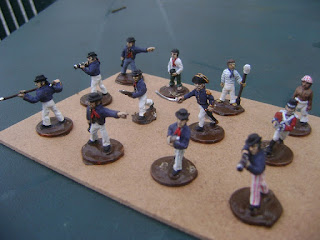 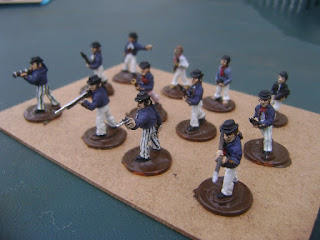 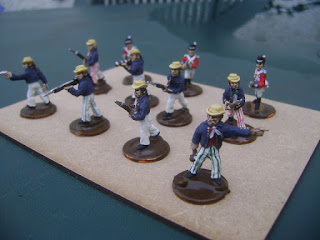 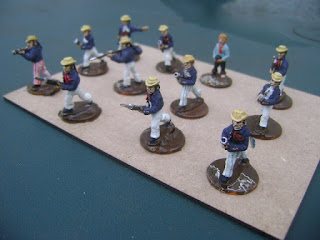 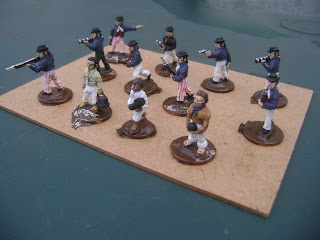 There's some weird white discolouring on some of the bases which I shall have to fix. 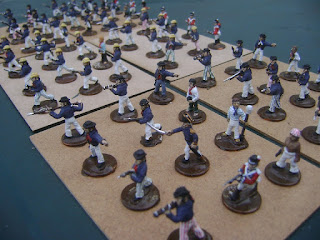 Here are all six crews together 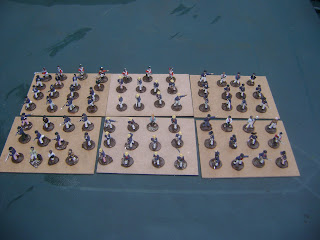 It's been lovely to have a break from 1815 - really fun figs to paint - but I'll probably leave the French sailors and Marines for a while and get back to my main project. Hopefully these jack tars will bring in a few pieces of eight which can go towards more Victrix and Perry artillery and cavalry!
Posted by Lord Hill at 06:57