So this is the worst English summer on record. It's not so much the rain as the DARKNESS which is making life so glum!  For the last few weeks I've had the light on from as early as 11am - I might as well go and live in Greenland. On the plus side, however, I've been able to use the atrocious lack of light as an excusse for my latest batch of poor painting. My Artillery Drivers didn't come out as I'd hoped and so, until the sun shows it's face again, I've abandoned doing any fine detail work. Instead I thought I'd do a mass of undercoating.

Ever since I finished the Black Watch and Gordons I've had the nagging thought at the back of my mind - "Oh God, the Camerons..."  just the thought of doing yet another couple hundreds kilts, and intricate white lace...every time I took out the box I'd have a long look at them, then sigh and put them back. The first mental hurdle was the mere thought of undercoating that many of the blighters. But now that hurdle is cleared and I'm looking forward to getting started on them. 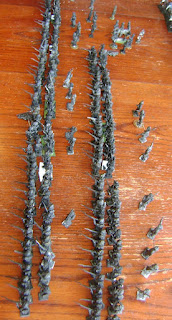 The table isn't long enough to fit a single firing line so, for the moment,  there are some companies in a second row.  Each company is 30 strong not including their serjeants, officers, and drummers. 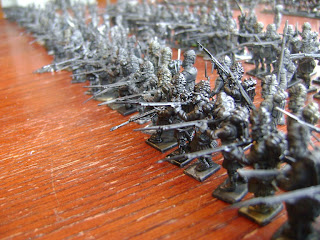 Looking forward to adding a couple of these fellows to the ranks when they become available. http://schnitzel-miniatures.blogspot.co.uk/2012/07/rude-highlanders.html 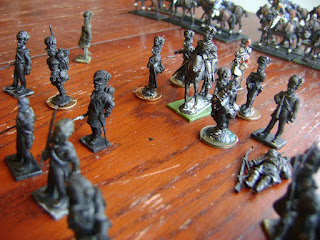 Five 8-horse teams of Artillery drivers trot past in the background. These photos were taken at midday - gives an idea of how dark it has been. 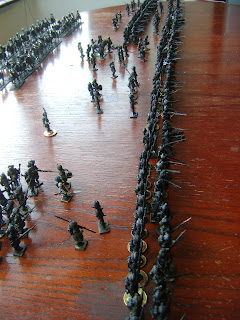 This will probably be the last bit of work I can do for this project until the Olympics are over. I have family coming to stay from Australia and things are going to be pretty hectic and crowded for 3 weeks - probably not the best time to fill the kitchen with paints, brushes and small metal Scotsmen.
Posted by Lord Hill at 00:58