God that nearly killed me. Sat here late at night and the last bastard kilt finished. I rarely drink alone but have just cracked open a beer and am sitting here with a thousand-yard-stare and tartan flashing before my eyes.
Now we can start on all that white lace - oh goodie... 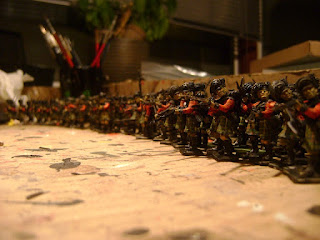 The kilts alone have taken me the last 2 weeks and that's with putting in some serious hours almost every day, the distant thump of the Notting Hill carnival keeping me company. I had thought the Black Watch kilts were bad, then the Gordons worse but the Cameron pattern makes them seem a delightful memory. Five stages - blue undercoat, green stripes, lighter green squares, red pinstripes, and finally yellow stripes. 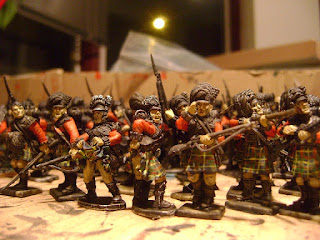 I was half-way through the kilt painting when these two wonderful reinforcements arrived from Westfalia Miniatures and were quickly drafted into the front rank. 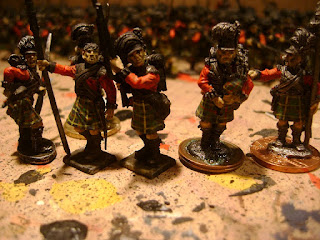 The very marvellous Victrix figs make up the majority but there is a mix of makes in there including a few Essex.
Above pic has (left to right) - Westfalia, Perry/Victrix hybrid serjeant, another hybrid, Perry metal piper, Foundry serjeant 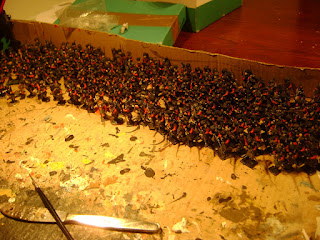 I'm actually two and a half companies short, but I don't want to think about that right now...