One of the chief joys of Victrix and Perry plastics is the potential to create one's own little creations to fill those curious gaps in the ranks. For my project I need all sorts of character figures as yet unavailable from any manufacturer and one of the biggest gaps is for various types of NCO. Here are some I knocked up yesterday.

I need lots of Grenadier company serjeants and this requires taking the pike (and hand) from a normal serjeant and grafting it onto a flank company arm with the correct "winged" epaulette.
I've taken pics before their undercoat in order to best see their various composite parts. 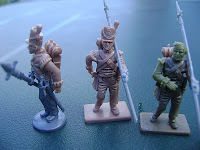 These three are all from the Grenadier company of the 1st Foot (Royal Scots). Here we have Colour-Serjeants Joseph Kidson and William Dobbs and Serjeant George Russell. Dobbs, of Bolton,  died of wounds on 12th July.
Nobody makes Serjeant Majors (which is odd seeing as EVERYONE makes highland pipers - there were only 3 pipers at Waterloo yet every battalion had it's Serjeant Major).
So here's Serjeant Major Francis Quicke of 1st Foot (Royal Scots).  A Somerset man he was killed at Waterloo and replaced by Colour-Serjeant Joseph Kidson (pictured above). 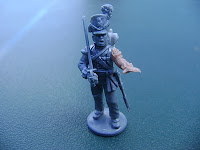 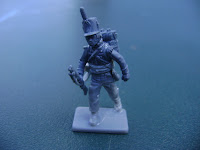 I have the Perry metal rifle command but I need a lot more running/advancing serjeants for my 3rd Battalion. Thus the most tricky conversion - a rifles serjeant running - which consists of Victrix running legs added to Victrix sash added to Perry rifles body (sliced off at the right height) with Perry head and arms and accoutrements. 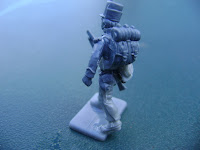 I'm rather fond of him - have decided he will be Serjeant Jasper Kenstock of Fullerton's company. More on the sad tale of Kenstock later. 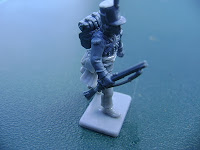 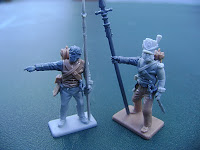