So, more than halfway through September but nowhere near the halfway mark in this month's project - the square of the 1st Foot (Royal Scots).  I have, however, managed two companies (if a company depleted after Quatre Bras is around 26 men) and am very pleased with them although the photos remain dreadful.
These will be the 2nd and 3rd Companies - both suffered over 40% casualties from their nominal strength (and therefore a far greater percentage from the "real" number present). 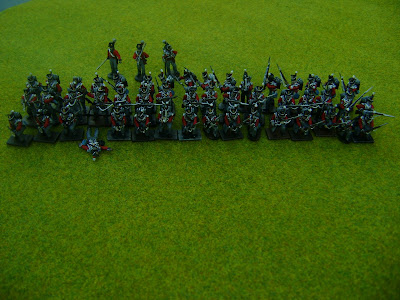 Here are some (horrible) close ups - 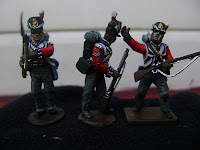 (l to r) - Some No.2 Company men - Private John McStravock of Glasgow, Corporal William Heath of Warwickshire, and Private Patrick Heavy . Corporal Heath was wounded, and invalided to England on 31st of August.
Private Heavy, from Templemichael, Longford, was an old cavalryman. He had served in the 8th Light Dragoons 1798-1799 and the 28th Light Dragoons 1799-1802. He enlisted in the Royal Scots in 1811 and was discharged two years after Waterloo aged 38. 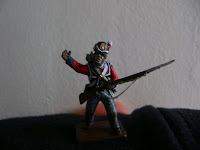 “The Curraisiers were shouting and our men shouting too, as hard as they could bawl. We gave them such a volley their first two ranks fell to a man and away they scampered, our men picking them down in the most horrid manner.”  (Lieutenant Black) 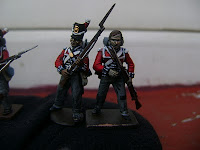 No.3 Company - Private Dickson Currie (discharged in consequence of  being "wounded right leg being ridden over at Waterloo") and Private Hamilton Turkington (who, in addition to having the most wonderful name, also appears to have born a passing resemblence to Hitler). 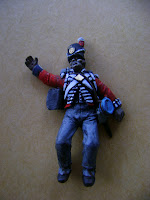 Poor Private Samuel Rivett of Norfolk. He died of his wounds at Brussels on 19th July.
And completely off topic - here's a pic I took today of some Scot's Greys I've been collecting bit by bit. A mix of old Foundry and new Perry. 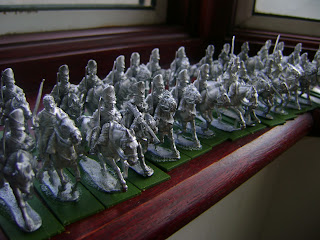