Now traditional apologies for tardiness in posting updates,  I will skip the boring excuses and just post some pics of a few men of Bowater's Company, 3rd Foot Guards. I haven't based them because the plan is for them to (one day!) be placed inside Hougoumont, skirmishing in the orchard etc. 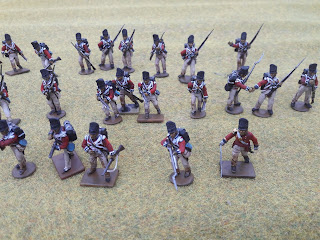 Captain Edward Bowater (seen here at the front) was born in 1787, the only son of Admiral Bowater.  He joined the 3rd Guards in 1804 and served in the Peninsula where he was wounded at Talavera.  He was wounded at Waterloo and for these wounds later received £284-15-6.  He was afterwards a Groom-in-Waiting to Queen Victoria and a Colonel-in-Chief of the 49th (Hertfordshire) Foot. In 1861 he was sent, with Lady Bowater, to accompany the ailing Prince Leopold for a winter in the south of France but died at Cannes.

Behind Bowater we see Private George Osborne scrounging some ammo from Private Jarvis Kent. Kent was killed during the defence of Hougoumont. Captain Bowater was tended, whilst still inside Hougoumont, by the wife of Osbourne who was accompanying her husband on campaign. She attended many of the wounded officers and men, tearing up her spare clothes to make bandages, until she herself was wounded, being hit by a musket ball in the left arm and breast.  In view of her bravery and assistance at Hougoumont,  Bowater saw to it that she was granted a form of pension , known as “the Queen’s bounty”, until her death. 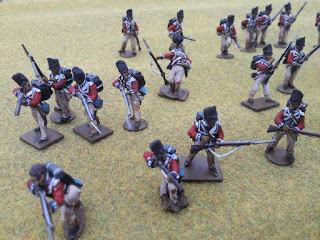 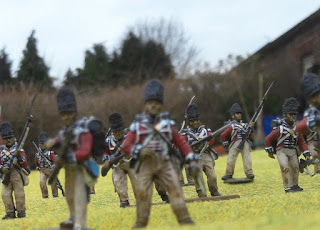 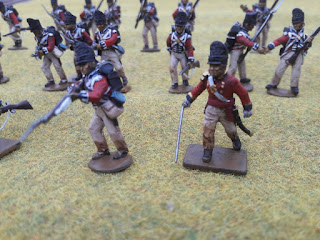 I realise now that I've missed a few buttons etc. So will have to go and tidy these up! It never ends! 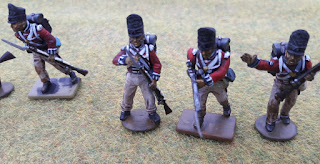 Furthest right is Corporal William Dorward, one of the few non-Englishmen in the Company - he was from Monilkiee, Angus. He had enlisted in 1813 and was aged 26 at Waterloo. 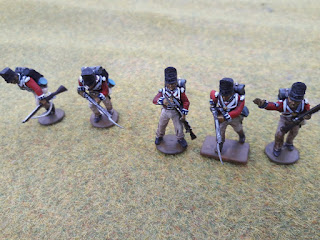