Little to report but I thought, it being 16th June, I should post something.
Here is the beginning of the next project, 2 squadrons of the Scots Greys (about 120 men)
They are a mix of Foundry and Perry figs and I will probably divide them up into one squadron each. I'm very far from rich so these have been accumulated through numerous little ebay bargains, hunted down over the last 12 years or so. The other four squadrons will have to wait for some distant date in the future when, hopefully, someone starts making 28mm British heavy cavalry in plastic! 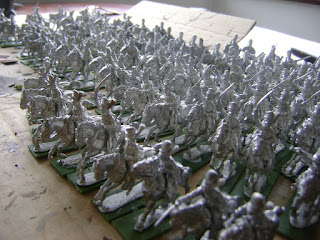 The new Perry figs are lovely sculpts but I can't help wondering why they were cast without the heavy white gauntlets which they wore. If you were about to engage in combat, probably with another big guy chopping at you with a big, sharp sword which would you go for? a) bare hands   or b) massive, thick leather gauntlets
So yesterday I spent about 4 hours adding my own milliput gauntlets to about 60 figs. They're a bit rough around the edges but I think they will look good when all painted up.
I'm also in the process of adding plumes to all the figs - I strongly believe that the Greys removed their oilskin covers and wore their plumes at Waterloo, and could ramble on at length, probably tediously, about all the primary evidence which supports this (not least being Corporal Dixon who describes having his plume shot off in the first charge!)

Whatever, there's nothing I can do about the oilskin covers adorning all of these figs but I can add a plume (cleverly protruding through an aperture in the cover...I have decided!) 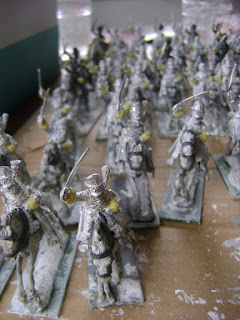 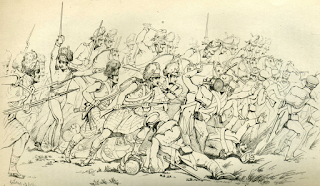