Rifles it is! Work in progress on the 95th

Many thanks to everyone who voted! In the end there were just a couple more votes for the Rifles but next up I'll do a squadron of the Scots Greys (the runners up), I promise.

So here is No.1 Company (Miller's), 2nd Battalion 95th Foot. The 2nd Battalion formed part of Adam's brigade and, along with the huge battalion of the 52nd, really hammered the final advance of the Imperial Guard late in the day. So I'm going to have both this battalion and the 52nd in a desperate firing line, with the 71st and 3rd Batt 95th advancing in line (being at the other end of the wheeling line, by the time the 71st had formed up the French had already taken to their heels).

So... early days but such a pleasant change to all that horrible white lace. 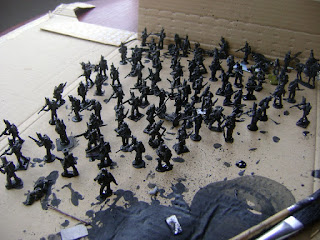 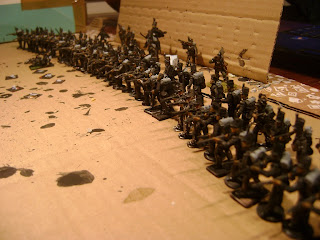 The Battalion was only six companies strong at Waterloo but to compensate for this, each was very large. No.1 Company had a nominal strength of 115 men. They suffered 25% casualties in their sharp exchange with the Guard - 4 men killed and 25 wounded. 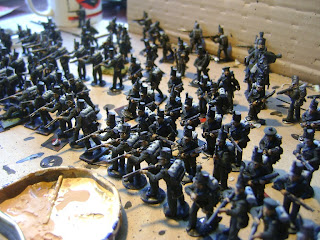 The company was commanded by Captain George Miller who was wounded by cannister shot fired by a British cannon which had been captured by French troops, “They fired it three times, loaded with grape, into our square, and did great execution.”  A Peninsula veteran, Miller had received a special gold medal for his conduct at the Nivelle. He was promoted to Brevet Lieutenant-Colonel for Waterloo and died in 1843. 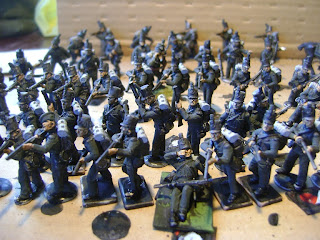 Man down at the front - poor Tom Plunkett!