Decided to award myself a holiday from the endless seas of scarlet and have a look at some artillery for a change. Like my infantry, I prefer to have units with either all their shakos in covers or all without. I can't imagine any serjeant majors ever standing for a mishmash, no matter how pressing the circumstances. So this is one of my covered shako batteries.
Since my research in the Guards archive I have also looked at bareheaded figures in a new light as, there in the quartermasters' notebooks, there are lists of those men who had lost their caps in battle (a surprisingly small number) and the consequent deductions from their pay! Only if a man was listed as "seriously wounded in battle" does it seem he might exempted from payment. As a result I try to give my bareheaded figures a shako in their hands, I'm pretty sure they'd have been hanging on to them at all costs! 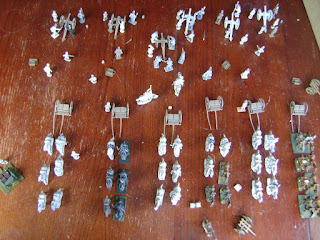 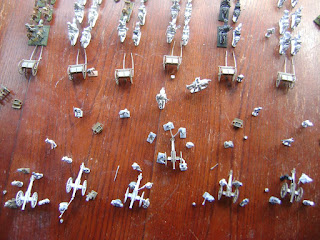 So here's Sandham's battery in its infancy - I've put together about four foot batteries so far although I'm lacking a lot of the necessary detachments of horses and drivers from the Royal Artillery Drivers.  Figures are a mix of Victrix, Perry, and Foundry. Thank god for Victrix! Their artillery sets have made this all possible as I would never have been able to afford all those caissons otherwise.
I love putting batteries together and having each gun doing something different, too many are firing here and I'll change that. As I understand it, guns took turns to fire with several often standing waiting rather than the great synchronised salvoes of popular myth.

One thing I find hard to explain is the nominal strength of artillery batteries - for Waterloo each battery of RA was over 100 men - Sandham's, for example, lists 109 men to receive the Waterloo medal. If each gun had a crew of 5 men, that makes 30 and even with a couple of dozen extra helpers it;'s hard to see how the number rises above 50.  It's not as if the others were riding the horses and carts - that was the job of the RA Drivers (who themselves seem to be hugely overmanned - over 1000 men at Waterloo).
Equally odd is the lack of casualties among the artillery - Sandham's battery lost 3 men killed in the battle, (with perhaps 2 others dying of wounds later in July and September). When you consider the RA's positions during the battle, in the thick of infantry units which were decimated, it's hard to explain the trifling losses among the gunners.  But perhaps that's a topic for another day. 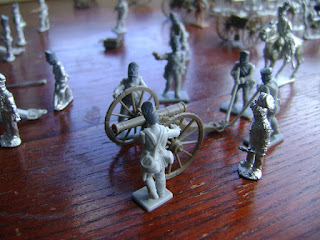 Wiping his brow (above) is Gunner John Barlow from Roston, Staffs. He was a Peninsula veteran and had been wounded in the neck by a shell splinter at Badajoz. In 1844, aged 57, he was admitted to Royal Hospital Chelsea to be an in-pensioner, his application accompanied by a letter of recommendation from Sandham. 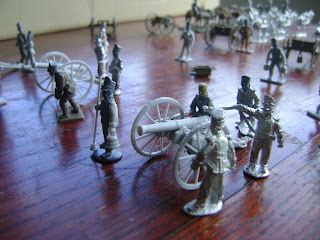 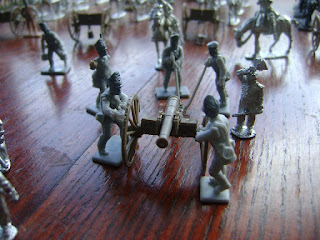 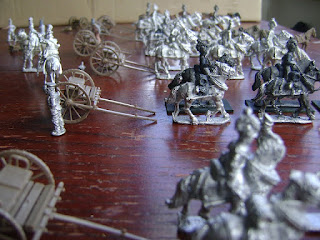 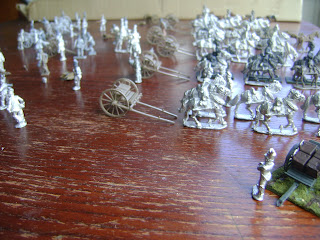 Sorry about the terrible lighting, it really is the grimmest "summer" day and the light is like mid-winter. 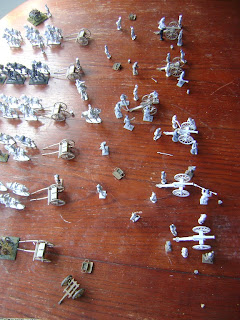 There are two mounted officers (Perry figs) - Captain Charles F. Sandham and 2nd Captain William Henry Stopford.
Sandham's battery was stationed in the centre of the allied artillery line between Hougoumont and La Haye Sainte, between Kuhlmann and Lloyd, and fired from this position all day.   Towards evening it was attacked in its left flank by Cuirassiers and, with Kuhlmann’s battery,  thrown back in confusion. The two batteries regrouped a short distance to the rear and were brought forward to their original position by Lieutenant-Colonel Adye.
Posted by Lord Hill at 05:58