I've been looking for ages for someone to produce decals for backpacks and canteens as I'd love to add that extra detail to each unit. I remember as a kid daubing a massive "4" on the back of some Minifigs and feeling very pleased with the result. These days there's no way I could try and paint numbers that small.
Alban started to make them but then never had any in stock, and seemed to have given up on the project.
Thus, last week I started trying to make some myself by just making the numbers in Paintbrush and then printing out the shrunken image on my ordinary printer.
I made backpack numbers 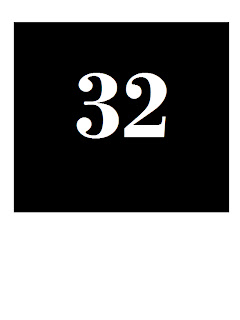 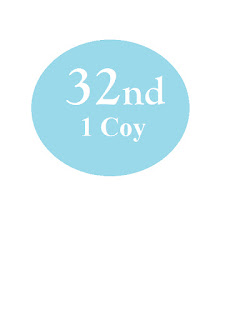 The backpack numbers looked ok but, when printed out, the details of the canteen was just too weak to be picked out - white being too faint on light blue, at least on my printer.

I started sticking them on with a dab of glue, and as long as you don't look too closely, the join is not visible. 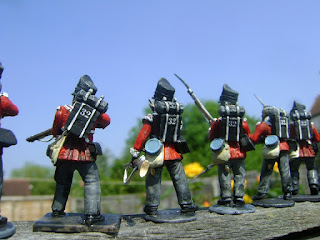 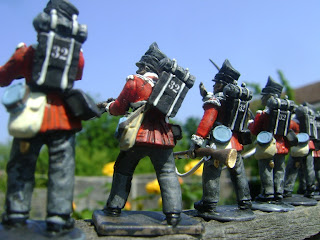 But then....! (and these things often seem to happen!) I read that Flags of War would be producing exactly what I was trying to do.
http://www.flagsofwar.com/index.php?route=product/category&path=68_85

Better still, you can just choose whichever regimental number you want so I will be getting a rather large amount of these!  My only worry is if they fit on a Victrix pack - they are considerably less broad than Perry packs, but I'll be happy to get them regardless if only for the canteen decals. I suppose in a perfect world I'd have liked to have had company numbers on the canteens too but I mustn't be greedy.

Of course many of the backspacks - Victrix and Perry alike - are not suitable for the decals as they are further festooned with cooking pots, spare shoes etc but I look forward to adding a decent showering of numbers among the massed ranks of all of my units.
I hope Iain at FOW turns to British hussars next -  all those saddle rolls need numbers too! 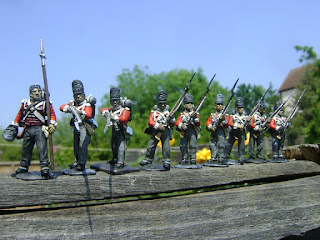 It's the first nice day of the year so I took some pics of some 32nd men that I've been working on this morning.
On the left is Serjeant Patrick O'Brien from Temple Michael, County Longford. He was 27 years old at Waterloo and served in Number 5 (Wallett's) company
The figure is a real hybrid - Perry legs, Victrix body, Victrix arms, Perry shako, Victix backpack, Perry head - I've just realised I should have given him a sword, will add one later!