Back at last! Perry Lifeguards and more hussars

It's been far too long since I wrote an update to this blog - all due to factors which were frustratingly out of my hands. I have, in the last month or so, been messed around to an infuriating degree while trying to buy some bases for the 10th Hussars. Two weeks wasted with an ebay supplier who just forgot to send them, and I had to cancel and start again. Then, when the bases eventually arrived from another seller I lost internet connection and have been without any for the last two weeks.

Anyway, enough grumbling. My first troop of 10th Hussars are now finished and based and I will post some pics tomorrow. In the meantime here is what I've been up to whilst hors de combat:

I got myself a mighty amount of Perry figures including some Household cavalry. For some reason which I could not put my finger on, these Perry sculpts looked completely wrong to me and, try as I might, I just could not force myself to like them. I had almost decided to sell them on when it finally clicked WHY they looked "wrong" to me. So simple - no plume! I don't know on what grounds the Perrys decided that the Household cavalry rode into battle without their plumes but I have never seen an image depicting them thus, all of my sources show them with the plume attached. 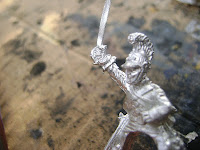 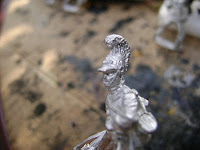 More mysteriously the trumpeter and officer do have plumes (and consequently look great). 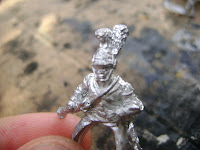 I therefore decided to have a go at adding my own plumes. I found a load of leftover French Victrix heads as these had plumes which were just the right size. A dab of glue and they started (imho) to look really good. 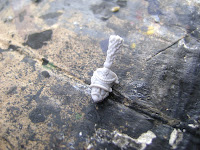 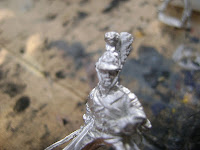 I'm more than pleased with the outcome for the unit. It took 10 minutes to do for the lot, I really enjoyed the creative process and they are now probably my favourite figures in my possession.  Can't wait to paint them but will have to wait a long time as I have such a mountain of other jobs to do first. 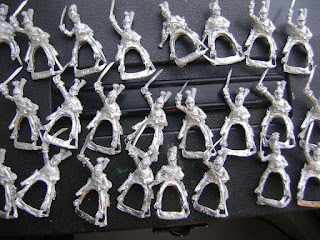 Not least of which is my next Troop of hussars. I really enjoyed doing the 10th but wanted to try another unit to give myself a break. I therefore decided to assemble and paint the next Troop as the 18th Hussars as these vagabonds were brigaded with the equally scandal-ridden 10th under Vivien. Different headgear, different colour facings etc and I also went for a differnt approach to assembling them. 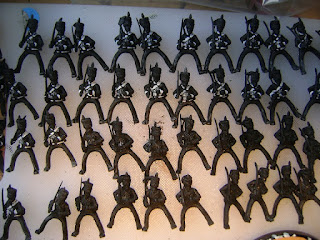 The 10th I had assembled completely, including attaching them to the horses, before giving everything an undercoat. With these 18th I decided to paint some of the body first, allowing me to get at the sash and braiding etc before glueing on the pellisse, sword and then attaching to the saddle. It's not that I was particularly disasatisfied with the previous method, rather I just fancied a change! 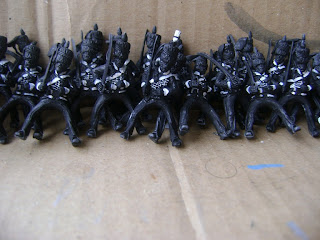 I've come on quite a lot since these pics were taken and I'll post an update of this unit soon.