Been crazily busy for the last month or so and had no time for this project. At last things have calmed down and I can get back to painting. Here is No.2 Company 27th (Inniskilling) Foot - work in progress.
Standing helpless in column they were heavily shot up from the captured farmhouse of La Haye Sainte. Of a nominal strength of 91 (probably around 80 in reality) 41 were casualties.
With the exception of two Scotsmen (Privates Charles Smith and Nathanial Wallace) the company was entirely Irish. Lieutenant Betty was the only combatant officer of the 27th to escape unscathed. However, his luck did not hold - on returning to Ireland on leave he caught typhus and died.

These are a mix of Victrix, Victrix with Perry heads, Perry metals, and a Front Rank casualty. 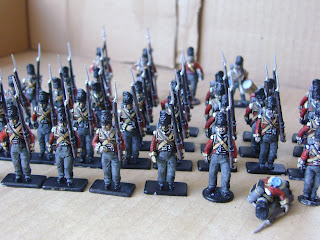 The Perry faces are beautiful, too beautiful in my opinion to represent the 27th who I have always thought of as a particularly ugly and unloveable bunch. As a result I have experimented with Victrix Scots faces grafted onto Perry shakos. The chap standing behind the casualty is one such Frankenstein creation. 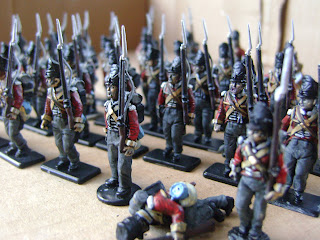