Happy Waterloo Day! To celebrate, here is my second French battalion at 1:1. It's taken quite a while, there's still some tidying up to do (some Corporal stripes missing) and the Voltigeur company (out skirmishing) are still to come, but it's been good to have a deadline to try to hit.

The 45e Ligne was one of the eight battalions which formed the 3rd Infantry Division under the command of Baron Pierre Louis Binet de Marcognet. I've now done two of them. This is how the madness builds. You do a company, then think "maybe I could do a battalion", then "maybe I could do a DIVISION!"  At this rate, I should have it finished by 2030. 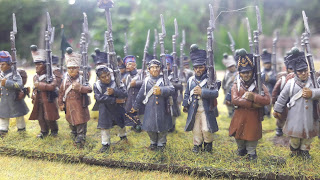 Figs are nearly entirely Perry Miniatures - I've just had to include a few Victrix for officers and NCOs (more on the latter below), a couple of old Foundry and there's even an officer by Essex somewhere.  The guy with his shako held high on the end of his bayonet is one of a handful of Perry Metals from the Spanish War of Succession range that I picked up on ebay and converted. 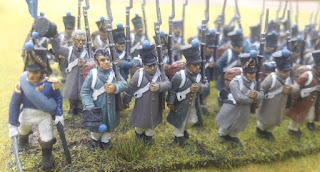 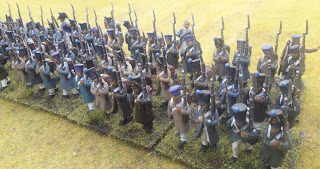 Various sources I have read suggest that there was a great lack of uniformity in the appearance of the French infantry on campaign, especially in what was thrown together in a hurry in 1815. A quote I recall but cannot place was something along the lines of there being hardly two men dressed alike. I had hoped that doing a battalion entirely in greatcoats would be really easy and much quicker than the previous battalion I had done in full tunics. However, in the end, I'm not certain this was actually the case. All the different coloured greatcoats were time-consuming in their own way, and much of the rest of the equipment was no different to the non-greatcoat battalion.

Each company is about 66 men strong, including officers, drummers and NCOs. With eagle and guard, this comes to a total strength of 402. Adkin gives a nominal strength of 502 for this battalion so, even considering that around 10% of every battalion strength was in the rear echelons (with baggage etc), my battalion is  probably a little understrength. Maybe one day I'll add the missing 50 men, but that task is now at the foot of a very long to-do list!

I've searched high and low for information about company fanions. While I found a few images for Grenadier and Voltigeur company flags, I have never seen or read anything for the four fusilier companies. The latest Perry French infantry box (1807-1814) contains a serjeant's right arm with a small company fanion stuck in the end of the musket and I liked the idea of trying to have one for each company. So, with a bit of artistic licence, I've just used the company pompom colours - green for 1st, blue for 2nd, orange for 3rd and mauve for 4th. 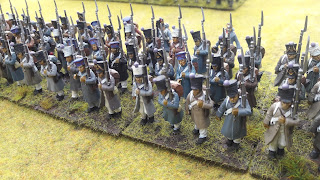 On the assumption that the Grenadier company might get "first dibs" on any new kit supplied to the battalion, I made them slightly less rag-tag, with a more uniform colour greatcoat than the other 5 companies. 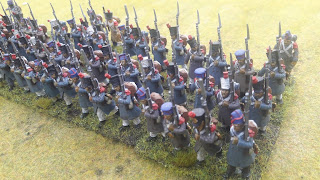 The 45th had served at Austerlitz, Jena, Friedland, Essling, and Wagram. Presumably, many of the men of the Grenadier company were veterans of those battles.

I hate painting drums and drummers and really rushed these through to get them done in time. Please don't look closely! Move on..that's enough now... 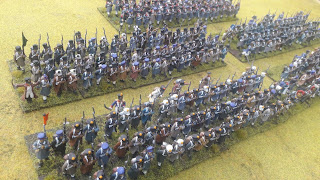 I don't have a table long enough to put out the battalion advancing in line (as they were as part of Marcognet's massed column at Waterloo), so I've placed them in a normal battalion column formation, in which, when the Voltigeurs were detached to the front to skirmish, the Grenadier company moved to a central position at the rear). 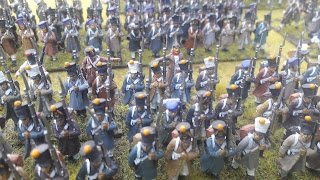 Fittingly, my attempt to take these pics on the 17th June were hampered by the same thunder, lightening and torrential downpours that hampered all the armies on the same day 205 years ago. 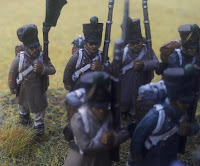 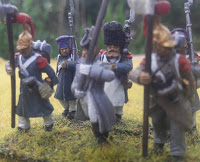 One strange event that happened during the much better weather of March/April/May was that, on two occasions, I discovered that several figures on my workbench looked as if they had melted. At first, I thought I must have spilt some thinner or similar on them and the plastic had been damaged. But when it happened the second time I realised it was a beam of very strong sunlight coming through a gap in the window blinds, then through the lens of my magnifier lamp and melting all in its path! A couple had to be discharged from active service but luckily most were recoverable. Actually, it was quite a happy accident as I quite liked the effect the melting had on some of the figs: On the left above is a chap whose shako now looks more than a little battered, but I really like that campaign-worn look! In the other pic above, the figure in the background in the forage cap has swelled up so that he now looks like something from a Bruegel painting - campaigning was hard but surely there must have been a few portly fellows like this!

The 45th is, perhaps, best known as one of the French regiments to lose it's eagle at Waterloo. I've always found it strange that none of the British accounts of the furious combat that took place in the attack and defence of French eagles ever mention either the 2nd/3rd Port Aigles, nor of the sappers all of whom were supposed to be guarding the eagle. Having men in halberds swinging at you, or a load of bearded men coming at you with axes is surely not something you would forget. Unless we are expected to believe that both Port Aigles and the 4 sappers were already hors de combat or had run away, I can only conclude that this commonly held belief that eagles had a special guard in combat is up for debate. Whatever the historical truth is, I enjoyed making these two Port Aigles out of Victrix and Perry bits and bobs. The eagle bearer is by Front Rank.

One of the difficulties of doing 1:1 if you want all the figs to be different is there are never enough NCOs and thus I have to make a lot from conversions. The lovely new Perry box does include a couple of serjeant arms, including the company fanion one above, but I only had a couple of these so had to get creative. Some of the other arms are borrowed from the British, Austrians and Prussians!

So, that's it for the moment. Voltigeur company skirmishing to follow next.
Posted by Lord Hill at 16:05