Continuing the new non-British European slant, here is a company of Brunswickers from the 1st Light Battalion, presumably fighting somewhere in or around Hougoumont.

The first Light Battalion saw action at Quatre Bras (hence the odd bangaged head above) and at Wateloo were grouped with the Avant Garde and the Leib Battalion in the defence of Hougoumont.

I'm not certain that this battalion's exact role in the battle is known but Osprey's Brunswick Troops 1809-1815 gives casualty figs of 6 killed, 31 wounded, 34 missing. This is much lower than the other Brunswick light and line battalions, so they were presumably either not heavily engaged or were protected from the worst of the French artillery bombardment by being stationed within the farm complex.

Figs are a mix of Perry metals and plastic conversions. 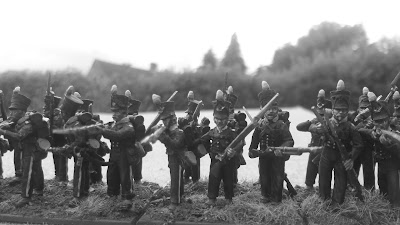 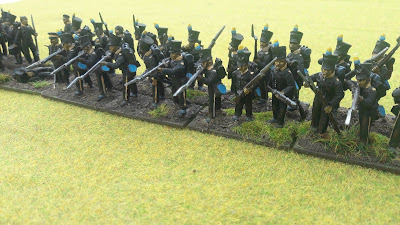