I thought I'd wind the year up by getting the army on parade and having a bit of an end of year inspection - only two and a half years to go now and still rather a lot to do! So here's a look at each of the British brigades:


﻿
﻿ Still many missing - quite a large regiment at Waterloo. Shako decal problems solved! Steve from Victrix knocked up an excellent set and I received them within a day of my desperate pleas for help! I'm painting these at the moment so will post some pics in the new year. 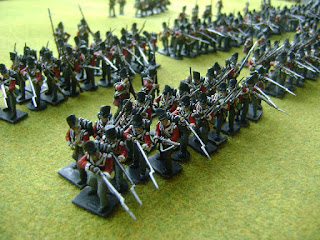 I've incorrectly lined them up in the normal 10 companies - actually the 32nd had been so cut up at Quatre Bras, especially in terms of officer casualties, that at Waterloo they were grouped in six "divisions". 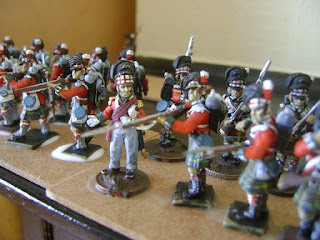 In the new year I'm going to start basing these as well as adding the names of each man to the underside.

Six companies - some skirmishing in the sandpit at La Haye Sainte, others back up on the "knoll". With just the two plastic Perry riflemen available it's actually the Rifles that I have most trouble accumulating, still hundreds of these grasshoppers needed. 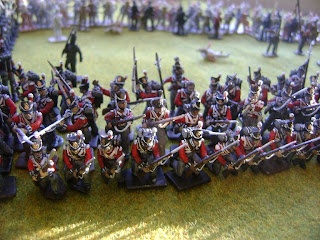 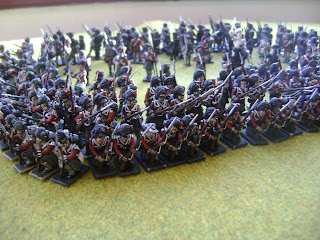 The Black Watch had been so badly mauled at Quatre Bras that they were severely depleted at Waterloo - I wouldn't be surprised if they had in fact joined up with the 44th to form one square when necessary (although I don't think there is any evidence to support this). 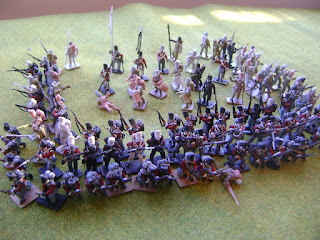 The 44th (East Essex) Foot - the only non-Scottish regiment in Pack's brigade - were similarly reduced in number after Quatre Bras. As you can see I'm still a very long way off from completing this square. The 44th are all covered shako Victrix figures.

While the other three regiments will be in square, the Gordons will be charging/advancing. I'm short 2 of the 10 companies. The existing 8 are mostly Victrix with some metal Perrys and Foundry. 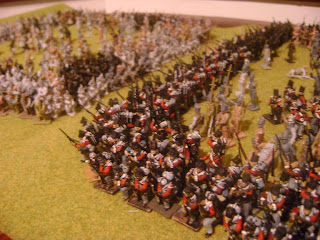 Still missing a few kneeling figs but these four regiments are pretty much done - they are almost entirely Victrix although the 73rd have Perry covered shako heads (to help me distinguish them from the 69th, both having green facings!)

The "Flank Battalion" - the screen of skirmishers made up from the combined light companies of the four Halkett regiments, commanded by Major Vigoroux of the 30th. 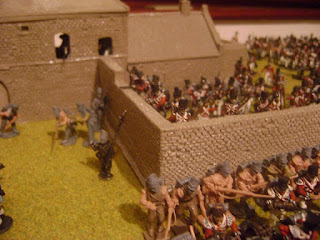 ﻿ I've only got a couple of pieces of the excellent Hovels' Hougoument. Hopefully, one day, I'll be able to put these completed regiments within a completed Hougoument complex. I've been stockpiling trees for the orchard for the last year! 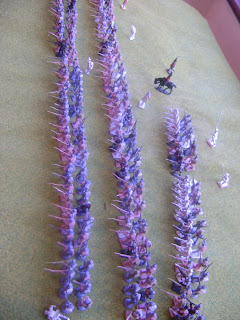 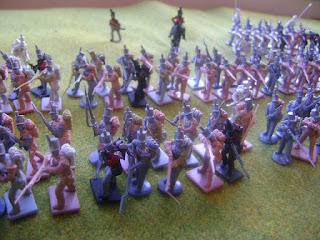 Having been strongly reinforced in England by the best men from the 2nd Battalion the strength of the 52nd was, in reality, more like 2 battalions and consequently fought in two wings - the left commanded by Lt-Col Colborne and the right by Captain Chalmers. This means scraping off the shako plates of nearly a thousand figures and sticking on (as yet non-existent) bugle decals! And that's just for this one regiment. I need a drink. 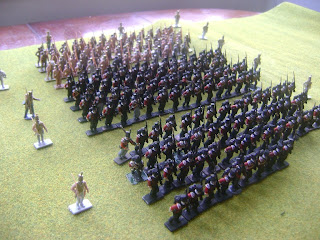 The 71st Foot - as Adam's brigade wheeled round to hit the advancing Imperial Guard in the flank the 71st, being at the far right of the arc, had too far to march and never quite got there in time. Another large unit absent from Quatre Bras, maybe 700 men thus a lot more shako plate scraping and bugle decals needed - this time with the addition of the famous Highland band that ran around the base of the shako. 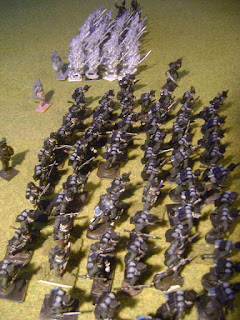 95th Foot - 3rd Battalion (2 companies) - advancing with 71st - these two are complete (70 men each) but as you can see have only painted one so far. The painted company are mostly Perry, Foundry and Essex. The unpainted are all Front Rank. 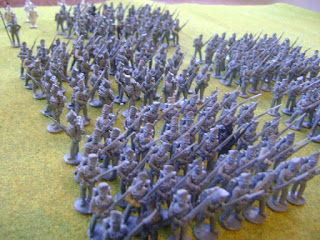 4th Foot (King's Own) - Lambert's brigade missed Quatre Bras only arriving on the morning of the 18th after a mad dash from Ostend (they'd come straight from the war in America) . The brigade spent a fair bit of the day lying down and catching up on some sleep while cannonballs flew overhead! The 4th will be all Perry figures. 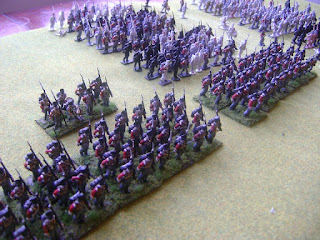 27th (Inneskilling) Foot. Only 7 companies of the 27th made it to the battle of Waterloo in time. Late in the day they were pushed up into an exposed position in column of companies (not square as often quoted from Kincaid). Here they were easily peppered with musket fire by the French who had taken La Haye Sainte and suffered heavy casualties in this relatively spell of action. They were still able to take part in the general advance, fighting alongside men of Kempt's brigade as they pressed forward as evening drew in. 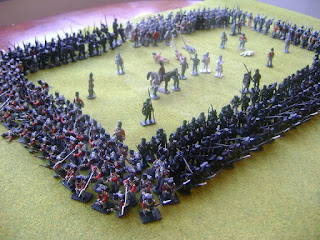 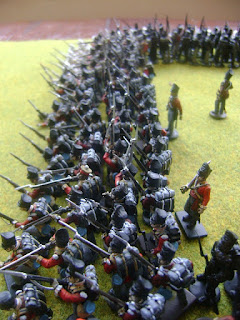 One of the most experienced battalions at Waterloo - Egypt 1801, Argentina 1808, then through the Peninsula (many men would claim 13 clasps on their General Service Medal), then the War of 1815. With the 27th, they moved forward and retook La Haye Sainte from the retreating French at the end of the day. 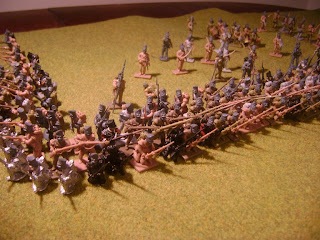 The 23rd (Royal Welch) Foot - Found out in the nick of time that the 23rd, being Fusiliers, all wore flank company wings. This has meant a lot of conversions to make enough serjeants with wings and pikes. As can be seen, this unit has barely been started and many hundreds more figures are needed. 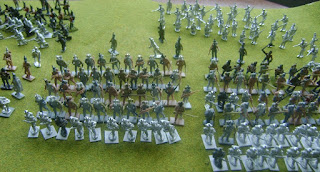 The 51st (2nd West Riding) were light infantry veterans of the Peninsula. They were the only British light infantry at Waterloo to act exclusively as such (the others fought mostly as line regiments), skirmishing in front of the 15th Hussars way out on the far right of Wellington's army and also manning the blocked up footbridge on the Nivelle Road. Here the men were joined by some Brunswick stragglers who recognised them from fighting in Spain and fought happily alongside their old comrades again. Thus, in the background above, are the only non-British troops in the project - some Brunswick skirmishers. These will be mixed in with Captain John Ross' Company who were positioned at the barricade on the road. 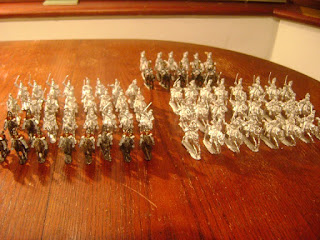 This whole project has only been possible with the advent of Victrix and Perry making affordable plastic 28mm figures. At present nobody makes plastic heavy cavalry and this is rather evident in the rather pathetic number I have managed to gather together over the last 5 or so years! As things stand the only way the cavalry side of this project will ever be completed is if either a) somebody starts making plastic heavy cavalry or b) I win the lottery. 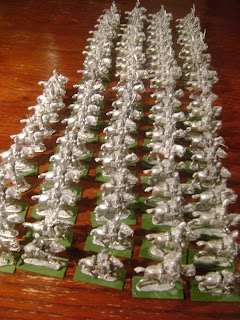 At present this consists of just one troop of Scots Greys! A ridiculous long way to go...maybe the 225 anniversary? 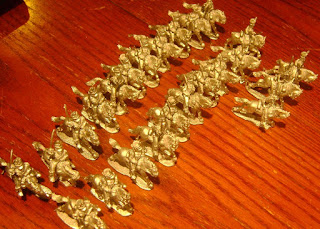 So hurrah for the Perry plastic hussars which have at least allowed a serious start on both the 10th and 18th Hussars.  I've posted these pics before but for the sake of completeness here they are again: 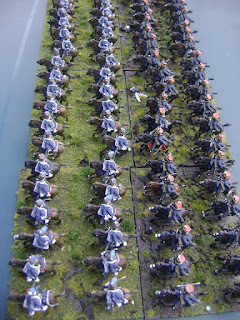 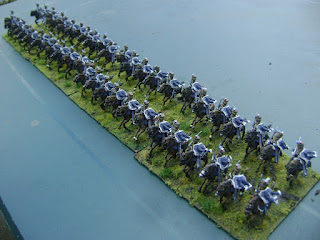 I've since assembled probably a further troop's worth but not begun painting them yet. 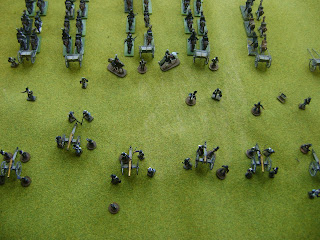 This time the huge cheer is for Victrix whose box of plastic Royal Foot Artillery has made the hitherto prohibitively expensive world of ordinance an achievable prospect! Again, I've posted these pics before but you can see how two boxes provides enough guns (and more importantly limbers!) for an entire battery. Great stuff. 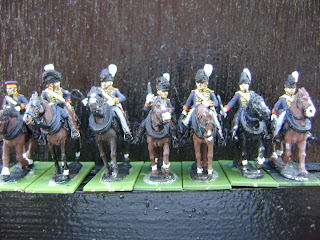 But those limbers need pulling and at present there are only these irresistable metal Foundry or Perrys to do the job - thus there exists the strange situation where I have spent more money on Royal Artillers Drivers, possibly the least glamourous regiment in the British army, than on any other. 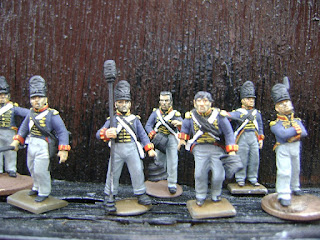 I have enough Foot Artillery to make over 4 complete batteries now - conversely I do not have even one completed Royal Horse Artillery battery - the same problem exists; that unless they become available in plastic I'll need to live to be 120.

So that's the situation folks at the end of 2012.  Many thanks again to Victrix and the Perry's for making these plastic figs in the first place and huge gratitude to Steve at Victrix for the spare figs he has sent to me. Also thanks and festive greetings to everyone who follows the blog and keeps me going with your comments. I shall have an extra mince pie in your honour and hope you all have an excellent Christmas and 2013.
Posted by Lord Hill at 09:15