I am obviously biased but it seems to me that there is something of a conspiracy against the British army during the Napoleonic era. Amassing a British army is often sneered at, especially 1815. "Oh dear no, I only collect Austrians 1801-1803, everything else is so passé".  A result of this is what I believe to be a commonly held theory that the British have been done to death by all manufacturers while other countries have missed out. However, while everyone produces the holy trinity of Wellinton, a Picton (oooh top hat), and Uxbridge, that's pretty much where it ends. The Perrys then turned out Kempt, Halkett, and Pack and a lovely 3 figs they are too but when you compare this to the extent of the staff etc from other countries I am left feeling rather short-changed:
Russian - I look at that new Perry high command set and weep.
Prussian - oh my god, Calpe do 8 command sets alone!
French - more than 100 command figures available? There must be at least 20 colonels, there are even valets carrying a tray of drinks for god's sake.
Even the Dutch have a nice staff set with 5 ADCs etc (plus the Duke of Orange + staff).

At present, as well as the absence of ADCs and other staff, nobody even makes the key British commanders at Waterloo - Ponsonby, Grant, Adam, Vandeleur etc

And don't even get me started on light infantry - what NONE firing or skirmishing, just 1 pack by Perrys "running at trail"? Have you SEEN the wondrous array of French light infantry available? Did the Light Division not do much in the Napoleonic Wars then?

So, if nobody makes ADCs what do you do? Well luckily Perry and Victrix plastics mean you can make your own. Here's what I made yesterday during a break from the Camerons: 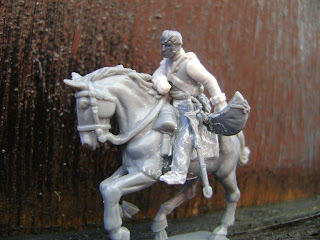 Here we have Ensign Hon. Edward Stopford - ADC to Byng of the 2nd Guards Brigade. He was 21 years old at Waterloo. Looks like he's on his way either to or from Hougoumont - maybe something about the spread of that fire. 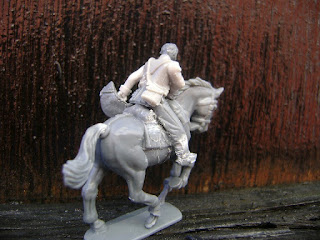 I picked up some ACW figs on the cheap off ebay with these conversions in mind. So this a hybrid of Perry ACW horse and legs, Perry tunic tails, sword, hat, Victrix officer body and arms. Still a bit ragged around the edges but should clean up ok when painted. 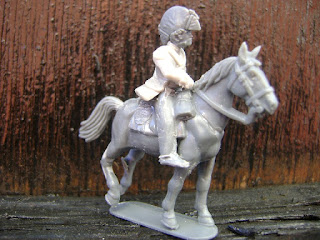 Lieutenant Hon.George Cathcart - ADC to Wellington, and as such wears 2 epaullettes. 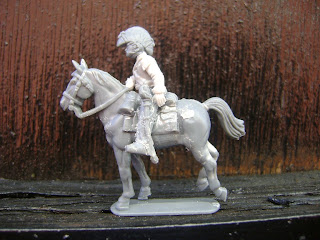 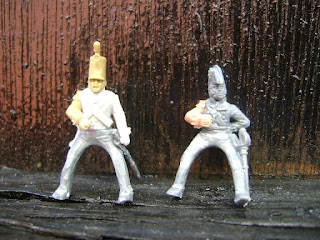 On the left is Pack's ADC - Major Edmund L'Estrange - he wears the uniform of his regiment, the 71st Highland Light Infantry (sash worn across body). His leg was shattered by a round shot and he died shortly after amputation.
On the right is Lieutenant Thomas Baynes (39th Foot) who served as ADC to Lambert.

These two still need horses - so if anyone reading this has any spare horses, plastic or metal, preferably standing...! 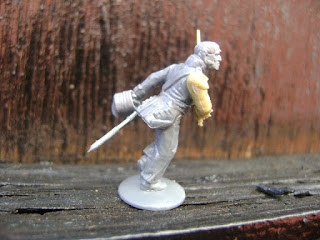 Unrelated but I thought I'd put up a pic of this other conversion - Captain John Garland of the 73rd. Stripped of his Highland uniform he retains his Highland sword. 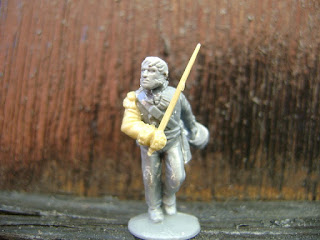 Wounded about 7 o'clock, so badly wounded that an obituary was printed in Gentleman's Magazine, but lived to become Lieutenant-Colonel.
"Captain Garland, on whom the command of the Regiment had now devolved, invited us from the shelter of the bank to follow him in an attack on about three thousand of the French infantry.  About a dozen of us responded to the call; and such was the destruction of the fire to which we were opposed, that we had not advanced more than six or seven paces before every one of the party, except me and my brother, was either killed or wounded. We carried our Captain back to the shelter of the bank, where we found our first Major [Kelly], who had not been with us during the day, having been attached to the staff.  He directed the Captain to be taken to the rear, and then caused us to be mustered....Captain Garland was a brave officer and had seen a great deal of active service....he went through the whole of the Peninsular campaigns and...had hitherto escaped unhurt.  Now however, he was most severely wounded, the thigh bone having been fractured by a musket ball.  Amputation was pronounced to be indespensable; but, objecting to the loss of a lim, by the most assiduous and eminent skill, in a twelvemonth he was sufficiently recovered to be removed, he being the last wounded officer who left Brussels.  His case was attended with great surgical difficulties, four inches of the fractured bone having been removed, and a union effected of the two extremities." (Morris)

Garland was attended throughout this year of convalescence by Private William Cox (also wounded) of No.4 Company, who then was in his service at Dorchester for the next 17 years.

Born 1784, son of John and Catherine Garland of Dorchester he served in the Dorset Militia before being commisioned as Ensign in 44th Foot.  He was promoted to Lieutenant in the 27th Foot in 1806 and transferred to the 30th Foot in 1807.  With the 30th he served in the Peninsula at the sieges of Tarifa and Cadiz and was made adjutant in 1811. He then served at Fuentes d'Onor, Salamanca, Badajoz, and Burgos and as a reward for his distinguished service was given a company in the 73rd.  He married a widow, Susan Martin at St Mary's Church Marylebone 1842 and lived to receive his MGS with three clasps. He died at Lille, France in 1851.
Posted by Lord Hill at 02:19