I spent the weekend doing more work on the Camerons - just waterbottles and haversacks but they're starting to look pretty good now.  By Sunday evening I'd had enough of painting and rewarded myself with my favourite part of the hobby - fiddling about with bits a knife, glue and bits of plastic to make new modified figs.
A problem that I've been wondering about is that nobody makes serjeants for the peculiar 71st Foot. If you're not familiar with the unique uniform of the 71st, I'll quickly outline the basics: they were a light infantry regiment so they wore the stovepipe shako and winged epaullettes, the same as the other light regiments at Waterloo - the 51st and 52nd.


The 71st, however, being a "highland" regiment (actually most men were from Glasgow or Edinburgh) retained some distinguishing features - the most noticable being a diced highland band around the shako. Incidentally, I'm not sure how I'm going to paint hundreds of these bands,  I think it might be beyond me and have been talking to Flags of War about possibly doing transfers. He says it would be possible so that might be a possible solution. For the shako I scrape off the plate of Victrix peninsular heads - I suppose at some point I will have to find a way of adding hundreds of tiny bugle badges in their place. Some experts assert that the 71st shako was actually a blue wool bonnet but I'm sticking to the conventional stovepipe look. 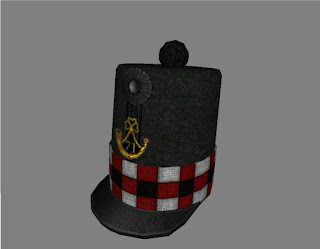 Anyway, the other big difference is that none of the 28mm manufacturers cater for the other quirk of the 71st, that serjeant sashes were worn across the shoulder, like Highland serjeants, and not around the waist as was regulation. So last night I set to work and grafted some spare Victrix highland serjeant torsos onto Victrix and Perry line legs. I then added the arms and heads etc 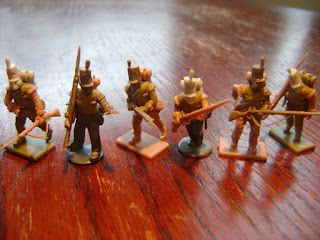 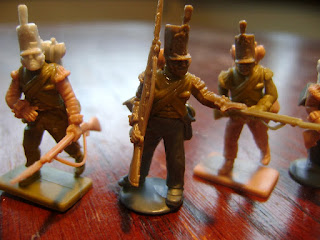 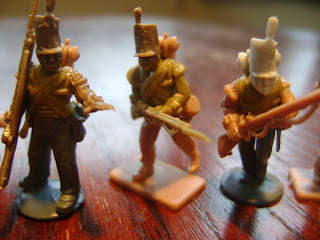 I still need to do some filing and fill in a few gaps but in general  I'm pretty happy with them. As well as having some nice new serjeants to urge on the men of Glasgow there is no wastage - the lower half of the highland serjeants are grafted back onto the torsos of the other rank figures - a shameful loss of stripes but they can get back into line and plug some of the gaps! 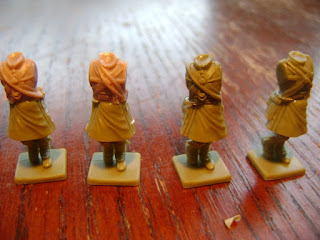