I've been very busy for the last few months with work and had very little time for this project. Eventually put finishing touches to the 18th Hussars this weekend. Pics taken a bit hastily and I can see quite a bit of static grass which needs brushing off! In the end I was quite pleased with this lot, though I might still prefer the 10th in their red shakos. 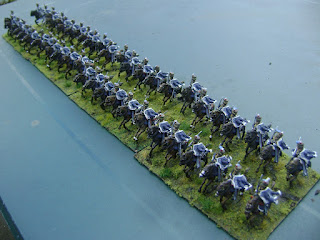 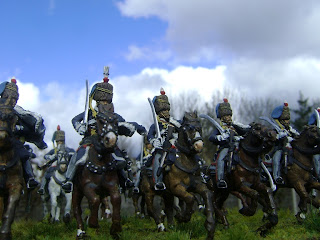 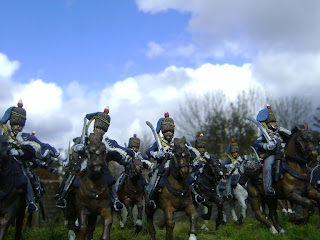 I tried a different method of assembly for these- painting the rider and horse separately and painting the braiding on each man before adding the pelisses and scabbards. Frankly, this seems to have been a pretty massive waste of time as 99% of the extra access which this allows (e.g being able to paint the waist sash etc) ends up being obscured anyway. In addition, and more importantly, NOT glueing the figure firmly together from the start has led to all manner of issues with parts falling off (scabbards/pellisses) as, no matter how hard you try, painted pieces will never bond well. There were also issues with some figures not fitting in saddles (because their sword arm had been glued in a position which would not wedge in under the carbine jutting up from the saddlebags). But it was a useful experiment and a lesson learnt. From now I will always glue everything together before beginning any painting - the 10th Hussars were a breeze by comparison to the 18th. 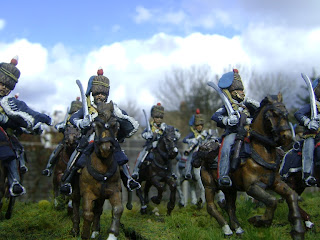 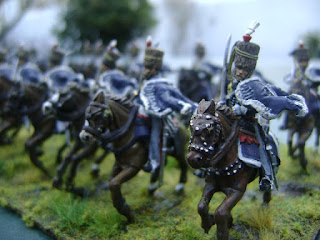 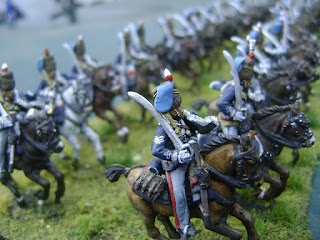 The 18th were an infamous band of vagabonds - their looting exploits after Vittoria had nearly seen them sent home from the Peninsula in disgrace - and I imagine they enjoyed plenty of time in Flanders to accumulate some ill-gotten gains before Waterloo. Many of the figures have therefore been fitted with various sacks, bags, extra pistols, and other paraphernalia. Here we see Serjeant Michael Donnelly, flanking troop commander Captain James Grant, with a nice French saddlebag attachment!

Captain Grant was court martialled a year after Waterloo for using "provoking, obnoxious, and insulting language to a Department of Commissiary General". 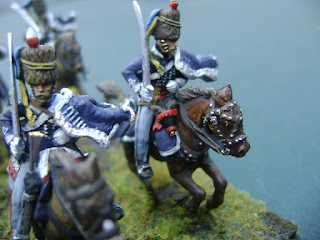 At the other end of the line is Lieutenant Charles Hesse, with a pair of pistols held in a holster. Hesse was wounded in the arm at Waterloo. He was later killed in a duel, his adversary being Count Leon, an illegitate son of Napoleon.

Here is the troop with Floyd's troop of the 10th. 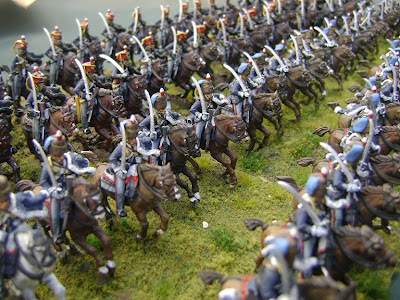